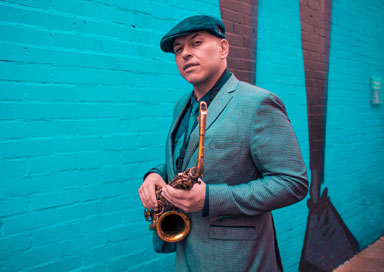 The Ibiza Sax Player is available for weddings, events, club nights and festivals has been playing his saxophone alongside DJs at venues and festivals across the UK and around the globe since the early 00’s and is one of the busiest UK sax players around. He first started to learn his craft in his home city of Birmingham.

The Ibiza Sax Player was also one of Hedkandi’s first resident UK saxophone players before they expanded into an international brand, Hedkandi was the first major brand to standardise the saxophone player and DJ formula.

He continued to play sax for Hedkandi throughout the 00’s and has played at some spectacular international clubs and venues including Grand Hyatt Hotel in Doha, Qatar and Club SaSaZu in Prague, Czech Republic with DJ Dean Rigg and singer Tara McDonald.

The Ibiza Sax Player has performed alongside many well known DJs but is also available for weddings and events as a solo sax player or with his Salsa band.

He has often been first choice saxophonist for many of these events including Heroes of House in Birmingham, History of House in Manchester, Better Days in Cleethorpes, So Good in Berkshire and Playhouse in Essex. DJs that he has performed with include Grant Nelson, Graeme Park, Danny Rampling, Marshall Jefferson, Seamus Haji, Hoxton Whores, K-Klass, Jeremy Healy, CJ Mackintosh, Seb Fontaine, John Kelly, Brandon Block and Alex P.

He has been resident at Bushwackers since summer 2015, Birmingham’s number one after hours dedicated house music club for well over a decade. He often performs with some well-known younger generation UK DJs and producers including Sammy Porter and Kenzie. Sax player and DJ sets are very popular at Bushwackers.

He has also performed with well-known non-UK DJs. He played sets with Leroy Styles at The VIP Rooms in Rotterdam’s Cool District and headlined at Select Club in Corsica with DJ Kris-B. In more recent years he has played at Fuel Brasserie in Marbella with Spain’s DJ Godoy.

He played at Pier One and Tropical Beach in Montego Jamaica in September 2014 for a week long UK style dance and urban music festival called FLYWAY JAM. He played sets with house music DJ and producer Carnao Beats and DJs from reggae sound system Luv Injection.

The Ibiza Sax Player is also one of UK’s first choice R&B saxophone players having performed with plenty of R&B and soul DJs too. This makes him a well-rounded seasoned performer when playing alongside most DJs and popular genres. He is well and truly one of few alto sax players that have got the art of nightclub saxophone down to a tee!

“He was amazing at our - he’s super talented and such a pro!!!! All our guests and us are still raving about him. ”

“He was amazing at our wedding, he played two sets (after day time food and before evening guests arrived). All our guests really loved it. Would definitely recommend. ”

“He provided first class entertainment at our wedding and was loved by all of our guests! It got our party started and created a fantastic vibe in our venue. Thank you! Kim and Ben Stanley ”