Performing classic French and English songs with backing tracks, this act is available for all kinds of events where a French singer is required.
Share Facebook Twitter
Recommended 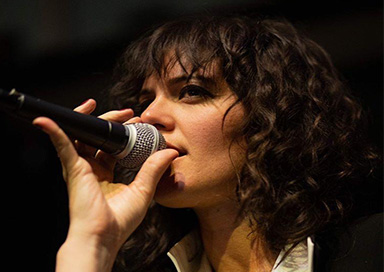 The London French Singer was born and raised in Paris, France. Music and performance captivated her attention at a very young age, where she decides to make it as a career, pursuing her studies in the arts (singing, dancing and acting).

She began her formal training at an art school in Paris and then graduated from Las Vegas Academy of Performing Arts.

In 2003 she took her first professional gig on the big Don Arden stage production, joining the cast of the show Jubilee. After her contract ended, she decided to move the New York City with big dreams, her guitar, and a hard-working mentality.

She learned to define her craft, herself and find her voice. Recording her first single 'What about love' set her the path of touring the US and Europe with her band.

2015 marked a new era when she signed her first contract to perform in Asia, with the Shangri-La hotel in the Maldives, managing and performing all major entertainment in the resorts for Christmas and New Year's Eve events.

Now based in London, The London French Singer performs in the Park Plaza hotels, as well as all over the UK, in different festivals.

The London French Singer is a mix of French and English standards bringing class, elegance and that 'je ne sais quoi' feeling. With her unique vocals and charm, she brings something that makes you pay attention.