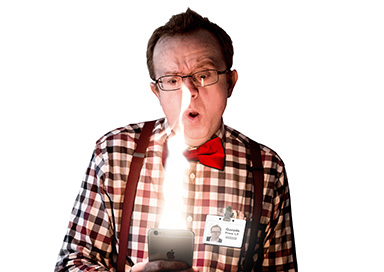 The iPad Magician has been a professional magician for nearly 20 years and has always been obsessed with technology.

This fusion of his twin passions has led him to create some groundbreaking iPad magic that he performs at corporate events, private parties, trade shows, weddings, product launches, social media campaigns and more.

Even if your guests have seen a close up magician before, they’ve never seen anything like a digital illusionist. The iPad Magician combines centuries old sleight of hand technique with hi-tech digital animations, apps and programming to create something brand new.

The iPad Magician also offers his comedy magic character “Gareth from Tech Support” which is a hilarious combination of a magician, character comedian and live action prank show. You can expect phones to explode into flames, smoke to pour from your gadgets only for Gareth to give it a “hard reset” with a hammer! Don’t worry, you’ll get it back in one piece. Gareth walks around the drinks reception saying head office have asked him to check their phones and then the crazy fun starts! There’s a huge surprise when things start going in a crazy direction!

The iPad Magician is based in London, UK and has performed at every top venue in London and across the country in his career.

In magic he is known for his creativity and has advised for many TV magic shows and celebrity magicians like Dynamo. If you’d like some custom digital illusions involving your brand, just ask!

He is a proud member of The Inner Magic Circle with Gold Star, and was the winner of The Magic Circle Originality Award in 2014, 2015 and 2016.

That's amazing, I've never seen anything like that before! - Jonathan Ross

Much of the magic done in the next 10 years will be done by people like this and using methods like this. What you are seeing here is the future of magic. - Penn & Teller, Fool Us

That is the best ******* trick I have ever seen. I want you on set permanently. - Orlando Bloom

“You are a marvellous conjurer! Your performance made a huge contribution to my 30th birthday party. ”