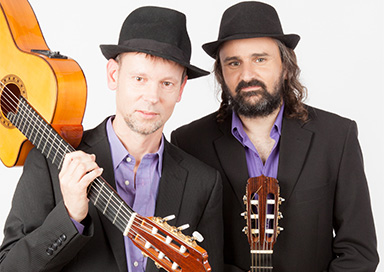 Looking for a Spanish Guitar duo in Bristol? The Bristol Spanish Guitar Duo met in 2008 at a Flamenco dance class and were asked to play a couple of pieces for a show. They found natural chemistry that worked well and they have developed a repertoire containing both foot-tapping energy as well as poignancy and beauty. They have played frequently at weddings, parties, restaurants, pubs and larger corporate events. They can give your event a continental feel with their Spanish, French and Latin American influenced repertoire.

They both have many years experience as solo artists and have played a range of different styles from rock and pop to classical, jazz and world music including African, Middle Eastern and Flamenco. They have also played in bands such as a 5 piece Gypsy Jazz band.