This modern, exciting party band has male and female lead vocals and is ideal for a wide range of events including weddings, corporate events & university balls
Share Facebook Twitter
Recommended 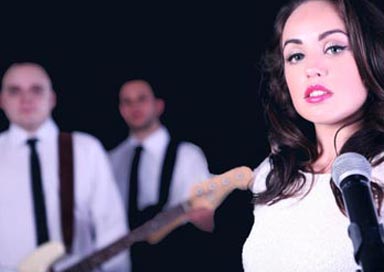 This modern and exciting party band is ideal for a wide range of events including wedding receptions, corporate events and university balls. Their tried & tested set list contains floorfillers ranging from Motown superstars such as Aretha Franklin and The Jackson 5, right through to modern party classics from Black Eyed Peas, Amy Winehouse and Kings of Leon.
Their standard package includes:

The band is made up of highly experienced full time professionals who have been hand picked by the band’s management for their outstanding musical ability and professional attitude. These guys know how to make your event a success and they have performed at a wide range of events from wedding receptions, 18th to 60th birthdays, corporate parties and many more.
Members of the band have performed around the globe and at such prestigious events as O2 wireless festival in Hyde Park, London, live sessions on BBC radio and even a Royal Wedding in the Middle East!

Previous venues and clients include:

Flexible to suit all events...
The band perform with male and female vocals plus guitars and keyboards and just like many famous bands use professional sequencers to complement their live sound, adding real drums, strings and saxophones to the mix, meaning you will be hearing the sound of a larger 8-9 piece band!
They can also provide a full 6-piece band using top session musicians if you would prefer a larger band and this is suited to larger corporate events and weddings.

DJ Service
For the ultimate party package, why not book their professional DJ & disco setup alongside the band? Keep the music pumping with a professional DJ service, giving your guests the ability to make requests all night long!

Extra Musicians
They can also provide a full band lineup from 6-piece to 9-piece band including horn section. This is ideal for corporate events and large wedding receptions.

“Just to say a big thank you once again you Were fantastic, thanks for making us have a great night. Hope you can stay longer next time ”

“We just wanted to say a HUGE HUGE thank you for performing at our wedding!!! You were all absolutely brilliant! Full of enthusiasm and energy!! Everyone commented on how great you all were, I will definitely be recommending you in the future!! Everyone thoroughly enjoyed themselves and had a great time! ”

“I can confidently speak for everyone when I say that we enjoyed the night and the dancing immensely. I was encouraged on the night that everyone danced all the time, but feedback afterwards was not only that you chose great songs, and that you were very good in performing them, but that the band's energy and enthusiasm whilst performing went down with us very well.On a more specific note - you have been very professional during the entire process, and we thank you very much for that. Being able to place your trust in a band to be really good - even having not met them before, really eases the process, and I can't think of one thing you could have done to make us happier than we were. Well done, and good luck with the business. I will not hesitate to recommend you in the future. ”

“We just wanted to say thank-you for supplying the entertainment at our wedding. Everyone thought that you were amazing & it really made our wedding night. I would def recommend you. ”

“Just wanted to say thank you on behalf of David and I for playing at our wedding on Saturday. Everyone said how brilliant you all were and a couple of our friends who are getting married have asked for your details so they should be in touch at some point. We will definitely recommend you to all our friends. Thanks again! ”