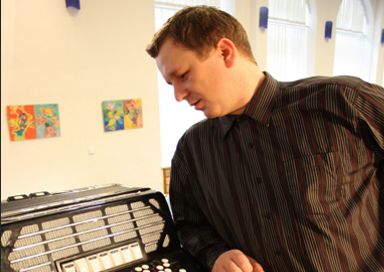 This London Accordion player has studied music around 17 years, and has been playing for public around 30 years. His repertoire is versatile – classical, popular, folk, klezmer, jazz standards. He has been performing for small venues to concert halls.

“l would like to confirm, he was our favourite musician who accompanied many events on accordion in our hotel, We lately enjoyed his music during the Beaujolais Nouveau Corporate party for over 100 participants. He always put his all effort to understand the type of event, age of clients and their mood. It is my pleasure to recommend Him. ”

“He is a gentleman and a fantastic accordionist. I hired him to play at my 30th birthday and from my first email inquiry, he was warm, friendly and professional. He answered all my questions quickly and was very flexible with my changing arrangements. On the night, He was smartly presented, smiley and easy to talk with. I was surprised at how little he had with him, but I suppose all you need is an accordion and a great mind full of music! To begin with, he played some quieter, background music so that guests to mingle and chat. As the night went on, he brought the tempo higher and played some really excellent music that everyone enjoyed to dance to. The night would not have been complete without Anton's excellent playing and all of my friends and family remarked how brilliant and engaging he was. I would definitely recommend Anton to anybody who is thinking of hiring an Accordionist. He playing is fantastic and his demeanour is professional - an all-round wonderful performer. ”

“We hired him to do a set during a French themed Olympic party and he was brilliant. He was easy to contact and make arrangements with and his playing really made the atmosphere on the day. He was very affable and adaptable to what we wanted, including walking around the building encouraging people to come to our party! Highly recommended. ”

“They provided the background music for the reception and supper in a delightful manner and provided the right kind of music in the right tempo and volume. He was a pleasure to work with and we would recommend him without hesitation. ”

“We hired him for my sisters wedding, he was fantastic! Arrived on time and was very friendly and more than happy to play the songs we requested, a great addition to the wedding, could not have been better. ”

“He made our Christening lunch for my Grand-Daughter, very special, all 30 people who joined us for the lunch said how much they enjoyed the music and when we made request, he was happy to oblige. I would book him again for future family/friends celebrations. ”

“We booked him to play the accordion during my mother in law’s 95th Birthday Celebration lunch. He arrived in good time and the family along with all the guests had nothing but praise for his playing. We selected many different types of music ranging from samba, tango, Viennese waltz, Latin and even some current tunes which he performed admirably and even added some of his own to please both young and elderly. A very courteous gentleman who aims to please and I have no hesitation in recommending him for any occasion. ”

“Last night was a great success! There is no doubt that his performance was the highlight of the night! His flawless performance set the atmosphere in the room and submerged in the spirit of Octoberfest. Thank you once more! ”