This Brighton close up magician has been blowing people's minds with his magic for years. From card tricks to bending spoons he will add amazement to any event!
Share Facebook Twitter
Recommended 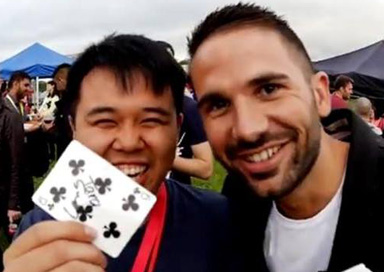 This Brighton close-up magician has been gifted with the art of magic from a very young age, at 7 years old he bent a spoon Uri Geller style in a restaurant and by secondary school he was know as 'the magic guy' - even his school reports have comments regarding his skill as a magician!

Following an appearance on Britain's got talent in 2009, he has naturally became a full time magician, highly in demand, performing all over the world from Nigeria to Mexico! He now specializes in his own form of 'freestyle magic' - impromptu close-up magic with cards, coins jewelry and any item he can get his hands on and borrow from your guests.

His style is fairy low-key but the magic packs a punch and you can expect your guests to be shouting 'how did he do that' when he mingles from group to group demonstrating impossible feats.

You can expect mind-reading, pick-pocketing and straight up IMPOSSIBLE street magic.

If you want to give your guests a gift they will never forget - let that gift be magic. Book the Brighton close-up magician for your event!

“This magician was an excellent choice for our wedding back in August. Having seen him perform at a friends party I knew that we needed this amazing magician to entertain our guests. Every single guest commented on how clever and entertaining he was. They were all in awe of him. I cannot recommend him enough. Thank you for being part of our day Al. Katie x ”

“We got this magician to come to my 40th Birthday party in Brighton on Saturday 25th April. I'm not sure I can put into words what he did to the crowd. He left everyone speechless and completely dumbfounded. He was absolutely brilliant. He worked the crowd so well, his magic was flawless. I'm still scratching my head.. The next day I had so many texts and calls from friends saying how fantastic he was. I can't recommend him highly enough. If you want to put the icing on the cake at your party then he is your man. He thank you for being part of the best night of my life. I was too engrossed to take pictures which is the only shame. I hope we meet again. All the best Izy and Anette. ”

“My hubby & I had been looking forward to having this magician perform at our Wedding Reception and so had our guests. They were promised outstanding entertainment and that's what we got! Absolutely mesmerizing evening. He is amazing at fooling the senses and the mind. No hocus pocus just good old vaudeville fun with lots of “oos” & “ohs” and “how did he do that”, & “did you see that”. Everyone was smiling throughout his magic, he catered well for the children, grown ups & the all age groups that attended our wedding. He was definitely the talk of the night! Every incredible feat that happened right under our nose's with such perfection; you start to believe that he really has special powers!! Our guests spent most of the night with both their hands on either side of their face's. I’ve been in love with magic since I was a little girl and this man is one of the very best in the business and I would highly recommend him. Thank you for making our Wedding Reception a night to remember!!!!! ”

“He did two fantastic hours of magic at our wedding on the 11th July. He was brilliant, catching everyone's attention. It was the best entertainment - I would recommend him to everyone. He can enhance any function! ”

“This magician is a magical legend. I booked him for a surprise appearance at our wedding reception as my other half loves him. He loved it and I had to stop him following Al round all night so the guests could enjoy his tricks. He is so good, it's like the stuff you see on TV with Dynamo and go 'the people are clearly in on it, ' but of course no one is! AMAZING. ”

“I booked this magician for my 40th last weekend and he completely wowed my guests. They were floored by the magic and he accumulated a fair few more fans along the way! From his flexibility with regard to location and times, especially when I had to delay his arrival at the last minute due to some flakey friends arriving late, he was extremely professional, and great fun. I know some of my guests now plan to book him for some of their events/parties and I wish I could find another opportunity to book him again! ”

“This magician worked his magic at my 60th birthday do recently. Everyone really enjoyed his sho, much discussion after as to how he did what he did. While he was very professional he was also very friendly and approachable, putting people at ease so they really enjoyed his magic. Thanks him if I need a magician again I will be in contact. ”

“Having seen this magician work his magic at a previous event we immediately knew that we wanted him to perform at our sons Bar Mitzvah celebration at Stanmer House, Brighton. This magician mesmerized over 200 guests as he mingled amongst them. He is a gifted magician and his magic appeals to all ages. He also has a very charming personality and I have no hesitation in recommending him to anyone who is considering a magician for their celebration or event. ”

“He performed at mine and James wedding on Friday 24th June in Spain and he was amazing, the best magician ever. A week on and still all our guests are talking about how good he was. Truly amazing would highly recommended to anyone. ”

“We hired this magician for our wedding this past Thursday. All I can say is it was defintolet money well spent. He mingled with the guests and performed some amazing magic. Everyone loved him and I personally loved the laid back but professional approach. People were actually moaning when we had to go and eat because that meant the end of Alex's slot. Amazing! Thanks for being part of our day. Danny and Candy. ”

“We Hired this magician for our wedding a few weeks ago and he didn't disappoint. Our guests were left shocked. The question on everyone lips was 'how did he do that' Amazingly entertaining for myself and my husband and our guests. Our friends and family are still talking about him now. Not only was he amazing at what he does he had a very smooth attitude, well dressed, he was a quality street performer. Defiantly not your typical cheese magician. He gave away his pack of cards to one of our teenage guests and taught him a card trick. What a lovely thing to do. Would not hesitate in having him at Future family functions, i'm already looking at having him for my 30th Birthday bash! Thanks again Mr and Mrs Philpott. ”

“We hired him to come and perform at our tenth wedding anniversary party in our garden. He was absolutely brilliant! He left everyone speechless! His magic was amazing and he worked really well liaising with all the guests. He was great fun but professional from the start. We would highly recommend him. Thank you magician! ”

“We hired this magician for our wedding drinks reception as he came recommended by a friend so we had high hopes and he didn't disappoint! He was professional, smart and a lovely lovely guy, our guests thought he was a friend of ours he fitted in so well. He was personable and his magic was astonishing leaving us and our guests scratching heads! He was great with the kids and my nephew has now decided to be a magician when he's older! I highly recommend him for any event, thanks so much! ”

“We hired him for our wedding on the 3rd December 2016, where do we start! He was phenomenal!! He was extremely professional from the start of the booking process right through to the end and went above and beyond to ensure my husband and I had an incredible performance from him. Every single one of our guests were absolutely buzzing about his magic tricks and all of them left wondering how did he do that?!! We had him for our arrival drinks for an hour and wish we had booked him for so much longer! Even in the evening our guests were still talking about his magic tricks he really was incredible! He really made the wedding day that much more special and magical, We will definitely be booking him in the future and would seriously recommend him to anyone wanting to book a magician. He was INCREDIBLE!!!!!!!!! Thank you so much Alex we cannot thank you enough. Sam and Lee. ”

“We booked this magician for our wedding reception back in June. Some might say getting a magician isn’t all that different for a wedding day thrill, but he would be wrong and he most certainly have yet to see some of the amazing close-up magic that he can perform! He was there throughout our drinks reception where he worked the room several times and from each table there were roars of laughter, lots of applause and shout outs for more! He took a serious amount of pressure off my partner and I during that first couple of hours (thank you!!) ensuring we had enough time to get around the room to welcome each of our guests properly. This magician is extremely professional, blending perfectly into your group on the day. He’s a cheeky chap, both witty and charming and seriously on top of his game. I would urge you to book him today and have no hesitation in recommending him for your event. ”