This fantastic Nottinghamshire-Based Erhu player will introduce a brilliant piece of Chinese authenticity to any party, wedding or session with her performance.
Share Facebook Twitter
Recommended 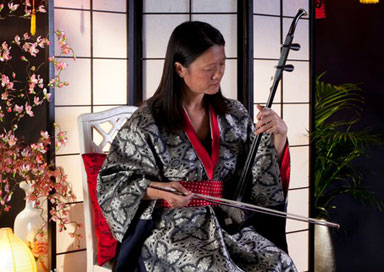 The most characteristic sounds of Chinese music are those made by the erhu, a two stringed instrument of extraordinary eloquence.

Her career in music began as a child prodigy at the age of seven, performing to thousands during the Cultural Revolution in China, and where her technical virtuosity won her a place at the prestigious Sichuan Conservatory of Music as their youngest ever student of the erhu.

After graduating, she was invited to stay on at Sichuan Conservetory of Music to teach and perform as a soloist where she stayed, consolidating her musicianship for eight years. Her musical epiphany came during this time in her year at the Central Conservatory of Music Bejing, where, studying under Professor Lan Yu Song, she was able to transcend technical accomplishment and become an artist in the truest sense, using her passion and talent to communicate through her music.

She would say “I play from the heart”, a philosophy which informs every choice taken she has made and path travelled since.

Based in Nottingham UK since 1990, she performed for several years with the London Chinese Orchestra performing at such venues as the Purcell Rooms and Queen Elizabeth Hall bringing Chinese classical music to a UK audience.

She has also worked in Europe in a western classical context through her many invitations to perform with the Luxembourg Sinfoniatta.

She founded and leads a Chinese folk ensemble: Chinese Whispers which has toured extensively in the UK for several years. She returned to China to source and preserve traditional Chinese folk music which she has arranged herself and introduced to the repertoire of her ensemble.

For many years, she has collaborated with artists in various fields and across many cultures: musically, this encompasses work with Jamaican reggae, Indian, African and Russian musicians. She has worked diversely with performance artists, theatre designers and playwrights to produce new works which often fuse western art forms with Chinese, bringing new perspectives, new audiences and new understanding to both Chinese music and Chinese culture.

She has worked extensively in schools and with regional arts organisations and has a long standing relationship with the Lakeside Arts Centre in Nottingham. Her contribution to the popularisation of Chinese music and access to Chinese culture in general has been repeatedly recognised over a number of years now by the Arts Council England.