Looking for a wedding guitarist in Manchester? Book this guitarist for your wedding and have the beautiful sound of a nylon string guitar or jazz arch top model
Share Facebook Twitter
Recommended 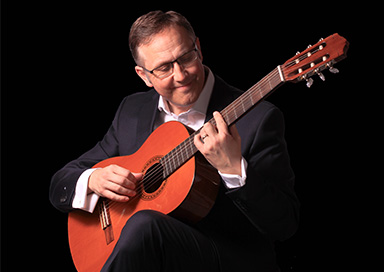 Looking for a wedding guitarist in Manchester? Book this guitarist for your wedding or special event and have the beautiful sound of a nylon string guitar and (if requested) jazz arch top guitar!

He will create a lovely ambiance with his playing which is ideal for weddings, events, bars and restaurants.

The Manchester Wedding Guitarist plays many types of music and has a diverse repertoire ranging from classical, Spanish/Latin, jazz & pop and is happy to learn requests. He has a lot of experience playing venues large (eg events at Manchester United and Lancashire cricket function rooms) and small.

He can play fully acoustically but usually plays with discreet amplification. He sometimes use a loop pedal and love to use this to improvise on, for example, Spanish or jazz themes. He's based in Manchester but happy to travel to play for your special event.

“His guitar (and keyboard) skills are superb. He achieves wonderful and enchanting results with ease when playing guitar and swaps effortlessly between styles. ”

“He is a very accomplished guitarist (and keyboard player). I have worked with him on many musical collaborations (outside of my TV work) over the years and am constantly in awe of his calm manner, creative ambition and professionalism. ”

“This artist played his guitar at the start of my birthday party back in May, beautiful sounds, for two hours. All of my guests loved his work. Having him playing as people were arriving added a certain "je ne sais quoi" to the event. He is a lovely guy and I recommend him thoroughly. ”

“We can't recommend him enough. He recently played at our wedding a couple of weeks ago and it was simply perfect! We had 3 songs in particular that we wanted playing for our ceremony- 'Heartbeats' by José Gonzalez, 'Half the world away' by Oasis and 'Not Nineteen Forever' by The Courteeners. He's not only learnt these specifically for us but played them with such finesse- so many of our guests commented on his playing afterwards. He also played while we had pictures taken and kept our guests entertained while they had drinks before our wedding meal. This again was very well received and provided a relaxing and melodic setting. Thank you for providing part of the soundtrack to our wedding day! Your mixture of modern and classical was perfect for what we wanted and on top of this you were so friendly and helpful prior to the day. We only wish we could do it all again! ”

“I found him after intense google searching and emailing many many musicians with low response. He replied within a couple hours, was not only available but very accommodating. After a brief chat, I realised how down to earth he is. My fiancé and I had a song in mind that he was unfamiliar with but with a positive attitude - he learned it within a few days. On the day itself, hearing him play was the most calming feeling and I am very grateful of that. He played the song we picked beautifully and continued with many others in his repertoire. Later he even played for my husband and I when we had a moment to ourselves. It was a beautiful day and would definitely not have been the same without him. Thank you so much ”

“A joy to listen to, with a repertoire of songs to suit a mixed audience, we would highly recommend him for any kind of event- small to large. ”