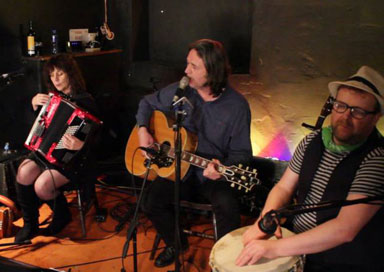 This professional Irish band deliver a genuine Irish sound with an eclectic mix of traditional, contemporary & original songs - they are the perfect band if you are looking for Irish songs sung by a real Irish person such as Whiskey in the Jar, Galway Girl, The Wild Rover, Dirty Old Town, Fields of Athenry, I'll Tell Me Ma, Molly Malone etc.

This lively acoustic band for weddings, birthday parties, festivals and corporate events and repertoire is a mix of Irish songs, ballads, reels, jigs, polkas and waltzes. The line-up is flexible and they can work as a duo (guitar/vocals, whistles/melodeons), trio (add percussion) or four piece band (with additional fiddle).

They can also offer a dance caller should you require one for organised dancing with a mix of traditional Irish folk music plus contemporary covers with a Celtic twist if required.

The bands key ingredients of outstanding musicianship, warm wit & uniquely Irish party spirit are the perfect recipe to infuse any special occasion with the authentic flavours of the Craic. This outstanding group of musicians including a Brit Award and Mercury Music Prize nominee. Whatever your age, and wherever you are from they will entertain you!

They are equally at home playing at large festivals and corporate events, to weddings & private parties and more intimate settings such as home/parlour parties.

The Singer/Guitarist was born in Belfast. He lived his formative years in the 1970's against the backdrop of the troubles in Northern Ireland. He worked as a freelance journalist in the 1980's; becoming Northern Irish correspondent for the Irish Post, before gaining a Scholarship to Ruskin College Oxford. It was at his time in Oxford that he formed this band and started writing songs in the late 1990's.?

A fascination with his country's musical history and a love of the stories that permeate its culture, bring an engaging authenticity to his songs. Capturing the passion and contradiction of the people and places of Belfast has seen him earn the reputation of a modern day Seanachaí. Not surprising perhaps, that he lists both the great Irish Tenor Josef Locke, and Belfast's Kathleen Largey amongst his key musical influences.

The Drummer/Percussionist is a founder member of the internationally renowned Guillemots and both a Brit Award and Mercury Music Prize nominee. The two musicians became friends and musical collaborators in Oxford in 1997 before he moved to London to become a core member of the Guillemots. He was both percussionist and co-writer helping the band enjoy significant single and album chart successes, and touring globally. He has has appeared alongside the likes of Rufus Wainwright, Snow Patrol, KT Tunstall, The Script, Beck, Morrissey, REM, Travis and even with a full orchestra at the BBC Electric Proms.

The Whistle/Accordion/Melodeon player has an Honours Degree in Music from Cardiff university. She sports an infectious sense of fun, coupled with a unique whistle style and a genuine affinity towards Irish tunes, she quickly became an audience favourite. A ban member since 2002 she also plays squeeze boxes and was the band’s first female member and also forms half of the duo.

The Violinist's searing improvisations take listeners on an edge-of-your-seat musical ride. Now a London based music teacher, his Eastern European style brings a fresh twist to the traditional Irish sound. He first performed with the singer and guitarist in Oxford in 1997 and the two have been firm friends and musical soulmates ever since. Prepare to be educated as the music comes alive with passion, playfulness and incomparable virtuosity.

The band’s music has also been played on radio shows in France, Norway, Germany, Holland, USA, Russia, Finland and Poland

Plus many more reels, jigs and dance tune

“They did a fantastic job playing at my Dads wake. Patrick from the band reached out in advance via phone call to check in, and this was a nice personal touch that put me at great ease. The crowd were lively and I had many many comments from friends and family that the band were great! Very happy with my choice to book this Irish band, and I would recommend to anyone looking for an excellent Irish band for any event, They played all the classics and the favourites that we knew. My Irish relatives enjoyed them and we were all up dancing at various points throughout the evening. My Dad would have absolutely loved it, that was the only problem, that he wasn’t there in person to enjoy it with us. Thank you for giving my Dad the best send off possible. ”

“Without a doubt the BEST Irish band I have ever heard! I would recommend them to anyone who is looking for something amazing, full of atmosphere and outstanding enjoyable music. We hired them for our wedding and would definitely hire them again. With a mixture of knee slapping, fun jigging, Irish music which everyone can enjoy. You can't miss out on these guys. The diverse collection of songs which they play draws everyone's attention throughout the set and the enthusiasm which the band brings is incredible, the whole room was fascinated and amazed by them, and everyone was dancing. The music aside, the band and Padraig were extremely accommodating with any of our ideas or request throughout our wedding process, the music and presentation was exactly as we wanted on our big day and everything ran very smoothly, the team are very professional and will always do anything to help. Thinking of holding another party, just so we can hear them again! Thanks for everything. ”

“We booked the band to play at our daughters 21st Birthday party recently and they were a tremendous success. Everybody really loved their music, they were a lot of fun and really got the party going. The band were charming and highly professional. They arrived on time to set up and entertained the guests both as they arrived and throughout the evening. Everyone at the party both young people and older guests really loved their playing and the range of tunes was fantastic. I would highly recommend this band! They brought warmth and character to the evening. This was definitely money well spent! ”

“WOW!! What a band of expert musicians. They played a private parlour gig for myself and 30 guests. We were amazed that with such a small crowd and room they managed to get us all up dancing. They were very professional and understood the dynamics of playing to a small group. We would highly recommend them to anyone. Without a doubt among the best I have seen. ”

“The band provided the evening's entertainment at our wedding and were absolutely fantastic. They had everyone up dancing from the word go and all our guests had such a great time. Thank you so much for creating such a fun atmosphere and for helping to make our wedding the best day of our lives. Highly recommended! ”

“Hi just wanted to say a big thanks for playing at Pat McDonald's farm last weekend! It went amazingly everyone enjoyed and they even humoured dad when he wanted to join in! Thanks a million. I would highly recommend, they are brilliant musicians and know how to make a party great. ”

“we just wanted to thank you! You guys were amazing! It was perfect, we and our guests loved your music! Everyone is still talking about it. Thank you for that wonderful everything, and thank you for the CDs! Without you the party wouldn't have been the same! I really hope you enjoyed the drinks and food and the evening as well? I had many parties before but that one was definitely the best! About 15 people told me this was the most amazing party and wedding they have ever been to. Thanks to you! I wish I could turn back the clock and have that party again. We're at our friends house in California now, great weather here. Hope to see you again one day. All the best! ”

“Thank so much for performing at our wedding. You really made the day with your mix of traditional Irish folk, songs hits and your own compositions. Our guests loved your music and your stage presence and spoke about your performance fondly during the second day of our celebrations. Since the first day we saw you play, we knew we wanted you at our wedding. Your set was extremely generous and excellent value for money. I have recommended to my friends by telling them that if you want a band who will get the guests up and dancing and a band who interacts with your guests then this is the band for you. Thank you again. ”

“The band played at my wedding recently and they were really impressive. Their music consisted of the Irish standards that every body knew and they had us all singing along to the Wild Rover and Molly Malone. A great band, book them, you won't be disappointed. ”

“Just want to say thanks to you and the band. It turned out to be an inspired choice for our Birthday Party. Everyone enjoyed themselves immensely, the music was terrific and completed the "spirit" of the evening. We highly recommend you. ”

“Words cannot express how wonderful you were, at the celebration we had for my mum's passing, at Greenwoods recently. So many relatives asked whether you actually knew mum, as you had made it so personal, they were, as you could probably tell, really enjoying themselves! I could not have wished for a more fitting tribute to my mum, just sad that you couldn't meet her as she would have been your biggest fan that night! With sincere thanks. ”

“We just wanted to drop you a line to say thank you so much to you and the rest of the band for playing a fantastic gig at our wedding last month! We had an absolutely amazing time, and you guys were the perfect end to the perfect day. We hope you had as much fun as we did, everyone thought you were brilliant. Thank you too, for the wonderful collection of CD's. It's a lovely reminder of the day. ”

“What a great choice for our recent wedding! We had Irish guests who appreciated the authenticity of the band’s sound. They played two lively sets which kept all our guests on their feet the whole evening. A very professional and entertaining outfit. ”

“Thank you and your band for bringing a wonderful night of Irish music to my party. My guests have not stopped talking about it and I will definitely be booking you for our annual Christmas gathering. The onstage story telling and tongue in cheek banter was very entertaining which, my friends thoroughly enjoyed (you should do stand-up). Thanks also to Gill, Huw & Peter for the musicianship and the onstage dynamics. See you all again soon. ”