The Brighton belly dancer has been learning, performing and teaching belly dance since 2006 and is available for parties and themed events in Sussex and beyond.
Share Facebook Twitter
Recommended 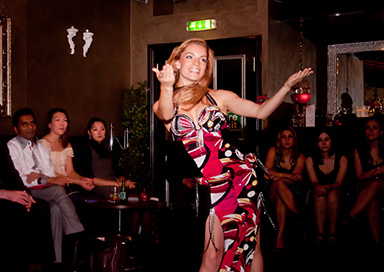 The Brighton Bellydancer has been learning, performing and teaching belly dance for over twelve years. She is an international performer recognised for her unique charm and grace.

In the summer of 2000 she went to Morocco to teach English as a volunteer. It was here that she was captivated by what is known as ‘bellydance’. She was at a wedding in Ouled Taima, a small town in the south of Morocco, and gazed in awe as the women danced and made music for each other, looking wild, loving and focused.

She encountered more of this dancing by both males and females at gatherings and parties. Sometimes the dancing was shy and coquettish, sometimes people were being humorous and simply having a laugh – always it was beautiful.

So began her journey into this diverse and fascinating art form. When she returned to London, at the age of 19, she began taking classes in Egyptian dance with Asmahan at the Pineapple studios in London. Instantly she knew this was the dance for her. Here she learned all about belly dance for the stage, and that it’s proper is name Raqs Sharqi.

She was lucky enough to also take lessons for some months with Khaled Mahmoud, who is now one of the most sought after Egyptian Dance teachers in the world. She also attended as many workshops and classes as possible, in the UK and Egypt, with some of the great masters of the dance.

She practiced a lot and began performing soon after her studies into the dance began. She proved herself to be an engaging and charming performer, always connecting with her audience with grace.

She taught and performed whilst studying for a degree in Theology and Religious Studies. After graduating she travelled to India with a dance troupe and performed for corporate functions and family celebrations in five star hotels and cruise ships sailing the Arabian Sea.

She joined the thriving London dance scene after returning from India and performed in Middle Eastern restaurants and clubs, as well as dancing for celebrations and hen parties. She also featured in the Arabian Dance Theatre’s 2009 production lham.

To learn more she knew she had to go to Cairo. So in January 2011(two weeks before the revolution!) she moved to Cairo. She lived there for a year and a half and took lessons from some of the best performers and teachers in Cairo: Lorna of Cairo, Khazafy, Sarah Farouk, Hassan Saber, Loonah of Cairo.

She is now based in Brighton and is available for performance and teaching.

“I have received some tremendous feedback regarding your stunning performance on NYE, all of which you more than deserve, well done!! ”

“Thank you so much for Saturday. We were buzzing all weekend. It was just what Amneh wanted. You were the perfect person to attempt to teach us, it was fun, we learnt, we felt comfortable with you. Watching you dance was such a privilege. ”

“Wonderfully elegant and sensuous - Nadia is a case study in how to engage an audience without words - wonderful! ”

“Thanks so much, the whole dance went so well and you carried the audience in the palm of your hands!!! Quite a few are contemplating a new career!! ”