Looking for an entertainer who can sing all your favourite Bollywood and Bhangra songs for your wedding or special event? Great Asian wedding entertainment.
Share Facebook Twitter
Recommended 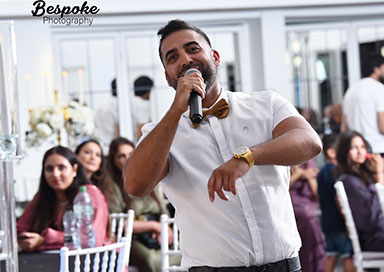 Looking for a real entertainer who can sing all your favourite Bollywood and Bhangra songs for your wedding or special event? This performer is a Yorkshire born Punjabi and English singer/producer & Economics Graduate who has had love for music and singing was evident from a very early age.

He first started his solo singing career in 2015 by releasing a few Bollywood covers for the charity 'Cancer Research', but when YouTube and the public took a real liking to his singing he became a rising star. Overnight thousands of fans started following him on social media then he started performing at many events and concerts all around the UK.

He then went on to releasing his first single song which was released worldwide on the 20th May 2016 and that song hit the UK charts and had nearly 200,000 views on YouTube in the first two months. This was the start of a music career which was only getting bigger and better with loads of media stations wanting to interview him and bookings coming in on a regular basis for concert/events and weddings.

He the recorded a cover version of John Legend's 'All of Me' which again was loved by everyone and he was also getting propositions for modelling and acting for movies and dramas!

He then decided to focus totally on his music and practice daily to become the best he can. He has released his second single song which was named as one of the biggest songs of 2016 by international media moghuls and star magazine.

This act has another profile on our website and can be booked as a singer guitarist:
The Yorkshire Wedding Singer