This exciting Somerset-based Ceilidh band are sure to get feet stomping at any event with their fiddles, accordion and guitar. Suitable for weddings or parties.
Share Facebook Twitter
Recommended 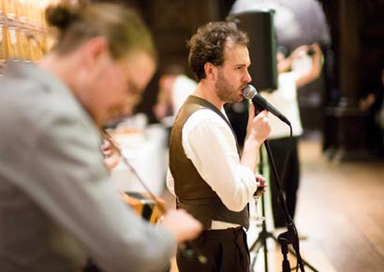 The Willows are an exciting, Somerset-based folk band whose passionate take on traditional British dance music has been thrilling audiences at festivals, concert halls and private events throughout the UK and beyond. The band features stomping fiddles, accordion, guitar and enthusiastic caller to teach the dances, The Willows have featured on UK TV and in Timeout and Hello magazines. The band have also performed at Windsor Castle, for the BBC Proms, at Sandhurst, Harrow School, Shakespeare's Globe and for the Royal Scottish Regiment HQ.

“The band performed at our wedding - they were terrific, and everyone - even those who said, 'Oh, I won't dance' - took part. It was the perfect finish to our wedding. Having live musicians was great and caller got everyone into shape! They were flexible and helpful right from the start and the quality of the musicians/music was topnotch. Will played acoustic guitar during our meal, which set the tone perfectly. The band were great in the evening; the caller was wonderful at getting everyone involved and explaining the dances to a group of international people who had never been to a ceilidh before and the music was as good as anything you'd get at a ceilidh in Scotland. It was the perfect end to the day and so many of our guests raved about what a wonderful time they had. The band and caller were great. Our photographer who shoots a lot of weddings commented that they did a great job of getting everyone dancing. Could not have been better! ”