This Yorkshire Pakistani Qawwali group is available throughout the UK and beyond and provide traditional Pakistani music for weddings, celebrations and events.
Share Facebook Twitter
Recommended 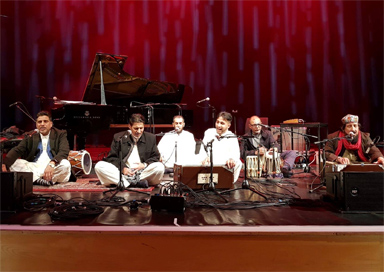 This Yorkshire Pakistani Qawwali group is available throughout the UK and beyond and provides traditional Pakistani music for weddings, celebrations and events.

The group boast some of the foremost Pakistani and British-Pakistani musicians living in the north of England, performing a form of Islamic Sufi devotional music that stretches back over 700 years.

Having won first prize in the Pennine Radio competition as long ago as 1981, confidently lay claim to being some of West Yorkshire’s first established Qawwal musicians, having performed for South Asian diaspora community – at weddings and traditional ‘mehfils’ (musical gatherings) – as well as for the wider public, at venues as diverse as the Bradford Mela, Oxford University, and as far afield as the USA, Australasia and the Arab Gulf.

Featuring impassioned singing, accompanied by the voices, harmonium, tabla, and dhol played with sticks these are the kind of sounds to let your spirit take wings.

The founder, main singer and harmonium player in the group comes from a musical family - his father was well known in the world of Bollywood and played music in 1960's 1970's, performing with his brother who played the shehnai / mangal vadya which is a musical instrument similar to the oboe, common in India, Pakistan, and Bangladesh.

They both played for Indian Bollywood movies giving background music for movies like Gunga Jumna, Dharmatma, Dil to Pagal Hai, Khuda Gawah and many more. They also played music with Ustad Allah Rakha and Ustad Mursalin Maskeen and worked with a lot professional musicians back in the 60's and 70's then in the 80's they formed the UK's first Qawwali band.