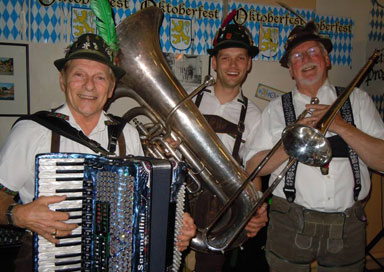 This Midlands German Oompah Band is a traditional Bavarian band, well known and very much loved throughout Birmingham and the Midlands! The band is available for beer festivals, corporate events, birthday parties, weddings, Oktoberfest events, Bierkeller nights and Christmas parties.

Established over 25 years ago, the band have played to audiences of up to 1,500 people all over the UK, entertaining party goers of all ages, and from all walks of life.

The band has enjoyed tremendous success over the years, and continues to wow audiences across the UK with an award winning act combining live, traditional Bavarian entertainment with modern day comedy and songs, guaranteed to get your event going with a stomp and a swing!  So if you are looking for an Oompah band in the Midlands, please book us for your event!

They are a band like no other, and their players have an extensive array of talents and skills, which means that the act and performance can be tailored to many different types of events.

Their musicians play nationwide and go anywhere in the UK and  can accommodate most budgets by changing the size of the band, from solo up to an 8-piece band.

“Just wanted to drop you a note to thank you so much for the superb performance you all gave at our Bavarian night on Saturday. We were so impressed with the way you all connected with every one of our guests from the moment you started. We have since received many compliments from people who came along and they are all asking when the next Bavarian night in Beckbury is planned! Please pass on our thanks to the rest of the band. Many thanks. ”

“Dear Oompah Boys, I just wanted to say a very heartfelt thank you for a wonderful birthday celebration for my mum. Your entertainment package is second to none. Can’t wait till I get to celebrate a big birthday – I know who will be doing the entertainment. Thank you, thank you from the bottom of my heart. You boys truly have the X factor. Love and best wishes. ”

“Just to say thank you for a fantastic night on Saturday. I have had e-mails, text messages, telephone calls the lot all congratulating me on a brilliant night. I would say there were about 10 of us that knew what went on at a Bavarian night so everyone else was there to make the number up and didn’t have a clue what was about to hit them. They know now….. Some were stiff, some had sore hands from banging on the tables but everyone has said it was the best night of their lives and are all asking “when we having another one?” my reply ” when you organize it”!!! I did manage to raise £365;00 for Guide Dogs for the Blind. Please say thank you to Christine a fantastic drummer and to Helmut who stole not only the younger girls hearts but all the ladies hearts I would say, they all wanted to take him home!!!!!!!!!! ”

“Thank you all so much for the most fantastic night ever! You really made my mum and dad’s Golden Wedding fantastic. Everybody who came said what an absolutely brilliant night they had had. I’ve never seen a dance floor so full with so many people up out of their seats all night, young and old alike. You couldn’t have done anymore and thank you so so much. We will be recommending you and hope to see you again in the future. ”

“I have to admit I was a bit nervous as I didn’t know what to expect what this entertainment would be like and how well it would go down with our friends. All I can say everyone absolutely loved it. You are both two very funny, very nice, but also extremely talented performers. I am trying to spread the word as much as possible because I want to go to another party with you guys as the entertainment. I do think however you should not have charged us for the evening as you seemed to get just as much enjoyment as we did!!! Once again thank you for what I call a one-off, never to be repeated, legendary night; and I wish you the best in the future. ”

“What can I say? You were brilliant!!!!!!!! Thank you so much for a fantastic evening, you and the band made my 50th Party such a success. All our guests from young teens to 85 year olds had a great time, the feedback was so good, a few said it was the best party ever and believe me they have partied. Some guests had no idea what to expect but were well impressed. Even my 80 year old Auntie who arrived on crutches could join in all the hand clapping, schunkling and have a good sing along to all the old songs. I was asked several times how I found you – Good Internet site plus some good reassuring emailing beforehand I think. I would recommend you to anyone. You are all great musicians and entertainers. Thanks also for making Graham (or was it Glen) and I feel so special on the evening, we had such a good laugh. We felt perfectly happy to sit back on the night and let you do all the hard work without having to add anything. (Apart from saying a few Thanks). I must also add we are very lucky to have such a great bunch of family and friends who were more than willing to party. There were many times I looked around the room and was so pleased to see everyone so happy and having such fun. Thank you again for a great night. ”

“I have to say that the response I have had back from the team re the Oktoberfest has been absolutely fantastic. They all had such a fantastic time and together we raised a tremendous total. The ladies at events up at Lillishall have asked me for your details and I hope that you don’t mind that I have forwarded them on. I think they are intending to organise their own event next year. Many thanks once again to you and ‘Helmut’. ”

“We had an absolutely awesome night last night and judging by the emails and texts we have had, so did everyone else. It’s got to be an annual event for next year. Please pass on my thanks to the rest of the boys. ”

“I just wanted to say a huge thank you to yourself and the band for the fantastic show you put on for us Friday evening. We needed to entertain a mix of employees and clients and could not have been happier with the results. From initial contact with you, you have been professional and attentive. Everyone left the event on a high after an excellent evening’s entertainment. It was something completely different, with the majority of guests having no idea what to expect. Well, you certainly didn’t disappoint! The only downside was the evening was over far too quickly! ”

“The whole event was a huge success and we saw around 1200 people throughout the day, many still partying till 1am. Your act was fantastic – a great crowd pleaser and we have had so many positive comments about it saying it was such fun. Thank you once again. ”