This Manchester Oompah Band are perfect for Oktoberfest events in the North West and beyond and will entertain your guests with fantastic music and games.
Share Facebook Twitter
Recommended 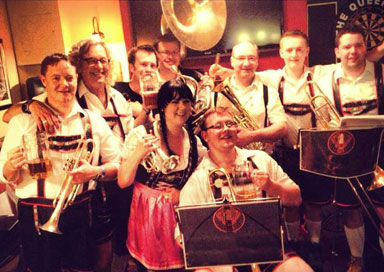 This Manchester Oompah Band are perfect for Oktoberfest events in the North West and beyond and will entertain your guests with fantastic music and games.

The band;s founders originated from a brass band background and thought it would be a fantastic idea to be able to play gigs together and take Oompah music to the next level by creating a new style and feel to what was a well-trodden approach. They invited fellow brass playing friends to join and performed their first ever gig in June 2013, in their home village, at Littleborough Cricket Club.

The band currently features many of the best brass players in the North West area and regularly perform with the country’s leading Orchestras such as The Halle Orchestra, The Orchestra of the Royal Opera House, The English Ballet, The Birmingham Royal Ballet and The Manchester Concert Orchestra. In addition to this our members also regularly perform with leading brass bands such as The Black Dyke Mills Band, Brighouse and Rastrick Brass Band, Grimethorpe Colliery Brass Band and Fodens Brass Band.

Since that initial concert the band has gone from strength to strength appearing regularly at local fund-raising and charity concerts and undertaken numerous Golf/Cricket/Rugby Club engagements in the North West area also. They have frequently appeared at the Manchester Bierkeller and in December 2016 were invited to perform, on consecutive weekends, at the Taunton Bierkeller, which proved to be a great success.

In addition to performing at the ITV Christmas party, at Chill Factor, the band has also appeared on 8 Out of 10 Cats does Countdown, in February 2016, and performed at the Edinburgh Fringe for a week in 2015, culminating in a sell-out show on the final concert. The band has also performed twice at the Butlins’ Mineworkers Brass Band Contest, January 2015 and 2016, to wide acclaim and performed to over 2,500 people. At the most recent performance the stewards were instructed to not let any more people in as they were in danger of exceeding the room’s capacity!

Unfortunately in July 2016 our frontman, and co-founder of the group, had to leave to pursue a career in the film industry in The Caribbean and California. An opportunity in his words “that was too good to pass up and the only thing that would ever force him to leave the band!”

They duly held auditions and soon appointed Joe, who made his debut performance in October 2016, when the band were invited to play at the Cork Oktoberfest Beag to some 6,000 people! What a way to start? But Joe did a brilliant job and helped make it a truly great event!

Standard show is usually 2 x 45 minute sets with a 20-30 minute break in-between. However this can be broken down still further in to 3 x 30 minute sets or 1 x 60 minutes.

The main band..for the full experience is a 9-piece outfit featuring the above line-up of instruments.

However, if required, we can also offer the following options: