This duo offer traditional Scottish music on fiddle and guitar and are available for concerts and events on Skye, the Highlands and the West Coast of Scotland.
Share Facebook Twitter
Recommended 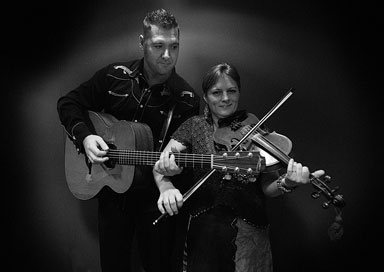 This duo offer traditional Scottish music on fiddle and guitar and are available for concerts and events on Skye, the Highlands and the West Coast of Scotland.

Both are probably best known for their work with two top traditional bands; Eilidh with The Poozies and Ross with Daimh, although some may recall the early 2000s when they made up 2 fifths of the cult folk explosion that was Harem Scarem.

Between them they have been at the heart of the Scottish Music scene and over the last 20 years have toured the world both with their own groups and performing as guest artists with a vast array of top performers, clocking up over 100 album appearances with names as diverse as Gaelic Superstar Julie Fowlis, Alt-Country legend Bonnie Prince Billy, Classic Crooner Tony Christie and World Music/ Jazz Fusion impresario Arnaud Ciapolino.

The duo project sees them perform in a comfortably intimate setting, showcasing music from their native Highlands that has been passed down to them by previous generations, and combining it with more modern compositions.