This Donegal Irish band specialise in weddings and events and can be hired as a duo or trio for your special event playing in the church or drinks reception.
Share Facebook Twitter
Recommended 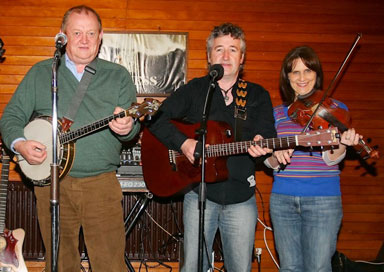 This Donegal Irish band specialise in weddings and celebrations and can be hired as a duo or trio for your special event in Donegal or beyond.

The guitarist and vocalist has been involved in music all of his life, and for many years now has been doing solo gigs in pubs & clubs all around the North West of Ireland, and the occasional trip to Germany, where he has built up many contacts over the years. He also has been leading his local Church folk choir for the last 25 years. He sings, plays guitar, harmonicas & Bodhrán.

The fiddle and whistle player was born & raised in Laghy, a small village in South Donegal. She is currently working as Vice-Principle of a college in Bundoran, County Donegal. Studying in University College, Limerick, she has a masters degree in traditional Irish Music, and is a former Ulster champion in both Fiddle, Tin Whistle & Piano.

The banjo player was also born & raised in Donegal Town, Ireland, and has spent most of his life playing Irish Folk & Traditional Music. Himself and his two brothers formed a very popular folk group in the mid-sixties called “The Travelling Folk” touring quite a bit throughout Europe. He is mostly known for his banjo & mandolin playing, although he also sings, plays guitar and accordion.

The singer guitarist can also be hired as a soloist: The Donegal Wedding Guitarist

Church Ceremony (usually performed as a duo of guitar, vocals and violin)

This is just a sample of things that they have played before at weddings. There are also quite a few, both Celtic & classical instrumentals which we can also offer as solo pieces on either fiddle or whistle… examples are:

They also offer many of the Irish dancing tunes, like Hornpipes, Jigs, Reels, Polkas and some beautiful slow aires. Plus many other songs from artists like Christy Moore, Furey Brothers, The Dubliners etc.

“Very enjoyable and professional to deal with ”

“The band were excellent would highly recommend without hesitation... ”