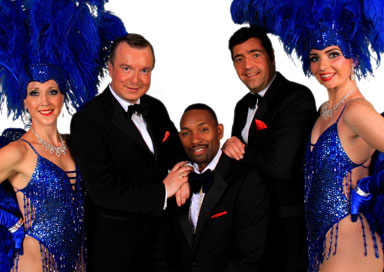 In 2016 this hit show was voted the number one Rat Pack tribute show in the UK by The National Agents Association of Great Britain at The National Tribute Awards for the second successive time. The show perfectly captures not only the wonderful music and comedy of the original legends, but also the remarkable personalities of the stars who truly ruled the entertainment world. The show is Britain's longest running tribute to Frank Sinatra, Dean Martin and Sammy Davis Jnr. In 2004 the guys were honoured to perform for HRH The Princess Royal at a Royal Command Performance and then appeared in front of 35,000 people with their Big Band as part of the VE Day celebrations. In 2011 they performed a sell-out show at The Indig02 at the 02 Arena in London.

"These guys are fantastic" Dannii Minogue

This outstanding production accurately recreates the legendary performances of the pre-eminent entertainers of their time, together on stage and features Britain's best tributes to the fabulous originals.

The show includes all of the hit songs made popular by the legendary performers such as "Ain’t That A Kick In The Head", "The Lady Is A Tramp", "My Way", "Mr Bojangles" and of course, "New York New York". These are performed with amazing accuracy and to achieve this, the producers found the very best tribute artists for the roles of Frank Sinatra, Dean Martin and Sammy Davis Jnr. These guys not only sing like their heroes, they physically resemble them on stage, share their unique mannerisms and even talk like they are at the Sands taking part in the summit.

David who also devised the show, plays Frank Sinatra and after working with the Vegas Legend - Buddy Greco, Buddy was moved to say that "This Guy Really is Sinatra" - quite a complement! but even this did not come close to the comment by Frank's daughter Nancy who said that David's recording of "New York New York" with a 35 piece orchestra for a new Atari PC game was "too close to my father’s recording" It really doesn't get better than that!

Des who plays Sammy Davis Jnr, was seen by millions for four years as Lenny in “Eastenders” for the BBC and can now be seen working as a presenter for "The Politics Show" again for The BBC and Notts TV.

Paul who like his hero also has Italian roots, was a BBC Musician of the year finalist and since then has worked all over the world as Dino.

So don't miss out on the chance to join the Kings of Cool for a unique performance - Vegas style!

"I can honestly say that having toured with these guys, they are as close as anyone will ever get to my dear friends – Frank, Dean and Sammy. At times it was just like being back with my pals at The Sands in the sixties – so much fun and it really doesn’t get any better than that. As for David Alacey – well this guy really is Sinatra – it’s frightening." Vegas Legend - Buddy Greco

“A big thank you for Saturday night. I have received nothing but amazing words for your performances. Please pass on my thanks to the rest of the gang as you truly made our big night a special one. ”

“I cannot recommend the Rat Pack highly enough - they were absolutely wonderful. They filled the room with their presence and drew our guests onto the dance floor. Please send them our grateful thanks for a fantastic evening and the icing on our wedding cake!!! ”

“I found the Rat Pack both professional and entertaining. They provided great value for money and made the party for a lot of people, us included. I would not hesitate to book them again and can give them my highest recommendation. ”

“You guys really are TOP of the premier league! Your shows gets even better every time that we book you ”

“The Rat Pack were terrific and everyone really enjoyed the show. They were professional from the start and really made it personal with the way they interacted with the audience. We would have no hesitation in booking them again. ”

“We have had great feedback for The Rat Pack Show once again. The show seems to get even better every year. We look forward to welcoming you back to the Towngate next year. ”

“It was a quality show and exciting tribute to the Rat Pack, with three top performers and four experienced show biz musicians to back them up. With some modern techno wizardry they made the same big sound as a full dance orchestra ”

“David not only looked like Frank but he had the drawl, the wit and boy could he nail a tune. Des made sure he owned every song. The audience got right behind him on hits such as Mr Bojangles and The Rhythm of Life. From looks to voice, Paul was every inch the real deal as Dean Martin. The whole thing was a triumph and while we may never see such greats as Frank, Dean and Sammy again in our lifetime but the good news is that as long as such talented impersonators as these continue to exist, we may not need to. ”