This Manchester guitarist has 27 years of experience and is well versed in the art of classical guitar playing. Perfect for any weddings, events and functions.
Share Google+ Facebook Twitter
Recommended 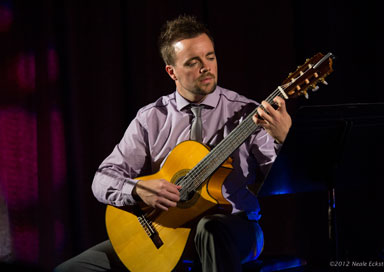 This Manchester guitaist has been playing guitar for over 27 years. In January 2015 he finished two and a half years of performing as a solo classical, Spanish and jazz guitarist on the 6-Star Cruise Line - Seabourn.

Prior to this he spent four years working as a professional musician in London; performing on his own, as well as with a great variety of styles of bands in venues including Wembley Arena, live on BBC and local radio, musical theatres, pubs, bars, clubs, weddings, corporate-events and festivals.

Now he has returned to land he continues to play professionally- he has formed a Spanish Guitar Trio and a Jazz-funk Quartet alongside doing regular function and session work.

As well as a performer, sight-reader, improviser and studio-musician, he is a keen educator. He has taught classical and electric guitar for over 13 years in education services including Leicestershire Arts in Education, London Brent Music Services and Bolton Music Services.

On moving to Manchester he is thrilled to be running the guitar department at Dawson's Music School in Altrincham where he puts his wide-ranging experience of music education and diverse performing career into his own curriculum.