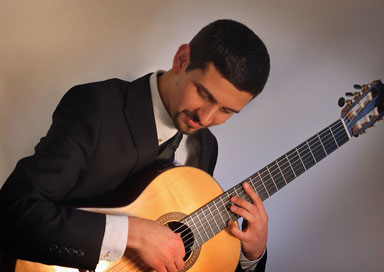 He studied classical guitar with Vincent Lindsey-Clark at Southampton University where he achieved the highest distinction mark in his year for performance at Masters level. In 2011 he was awarded the St Michael’s Church Scholarship in Southampton. Since graduating, he maintains a busy schedule performing not only guitar recitals but touring internationally as a member of various bands on banjo and double bass.

This Somerset based professional classical guitarist has performed internationally as a soloist and in various bands in America, Canada and Poland as well as playing regular tours of Western Europe and the UK.

He has a repertoire of beautiful music appropriate for weddings, dinners, parties and other events and can perform up to 2 hours of live music.

He provides his own amplification and can set-up quickly, which makes him an ideal choice when booking for the wedding ceremony and drinks reception.

“He is a talent. He played at a special event we held in the spring, and everyone thought he was wonderful. Accomplished and professional ”

“Playing to a large audience in Bristol Cathedral, he captivated with his elegant and stylish music-making, blending the familiar with the contemporary. His own enjoyment was shared by all who heard him, and we look forward to a return visit in the not too distant future ”

Mark Lee, Master of the Choristers & Organist at Bristol Cathedral,

“He was an excellent addition to our TSB Birmingham Branch Launch, easy to work with and played beautiful music that added a great ambience to the whole event. It was a pleasure to have him at our new branch opening ”