This 3 or 4 piece Sussex wedding & function band was created with the highest quality of musicianship in mind and uses backing tracks to keep the band smaller.
Share Facebook Twitter
Recommended 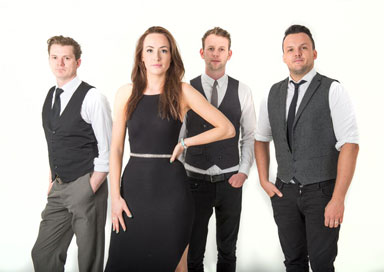 This Sussex wedding and function band has been created with the highest quality of musicianship in mind. They’re a smaller band line up compared to standard function bands and use professional backing tracks to enhance their sound.

The fact that they don’t have a drummer means that they’re one of the most recommended bands by venues that have sound limiters. There’s nothing worse than the band being cut off in the middle of the first dance!

They offer versatility that can’t always be accomplished by a larger band. They have performed throughout the UK, Europe and Middle East and are equally comfortable performing to 500 at a corporate event or 30 people at an intimate party. Whatever your requirements they can cater for them!

Chill Out and Live Lounge

“Now the dust has settled and June and I have returned to earth from cloud 9 can we both please take this opportunity to thank you and your band for a most fabulous evening. The quality of the music was superb and we have received so many comments on the fantastic music you played. As an indication of how well the party went, you even managed to get my 82 year old Mother onto the dance floor - A sight which has not been seen since 1976 !!!! Thank you. ”

“They gave a wonderful service and your professional, friendly and sincere manner meant I could rest assured that you and the band set your bar high yet aim deliver even higher, and you did. As well as you all being such a nice bunch, the band have a great sound and create a exciting, joyous party feel. Couldn't ask for more. Thanks again. ”

“Just wanted to say "you guys made my night"!!!! You were absolutely amazing ,all day I'm getting calls about how fantastic you were Thank you for being so professional , fabulous !! Kind regards ”

“Thank you for Saturday night. It was a fab party and you and the band were great. We loved the Jazz at the beginning (brilliant sax and guitar) and I really enjoyed playing with you----I think the guests enjoyed the theatre of me ripping off my abaya! The singer had a fantastic voice and the three of you really enthused the room to get everyone dancing. Thank you for being so flexible with timings etc. We will certainly recommend you. Very best wishes ”