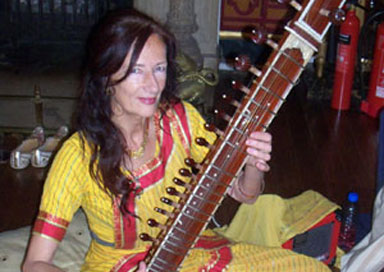 This sitar player grew up in the South of England in a musical family, and 10 years after leaving home and many adventures, went on to do a Performing Arts course at Brighton university, specializing in Indian music. She became involved in diverse music, dance and performance and studied Northern Indian classical music on the sitar with Viram Jasani at the Guild Hall, London, & more recently studied under Balugi Shrivastav, a renowned musician, teacher and international performer.

She has played and composed with tabla players and musicians, from singer/songwriters to ambient soundscapes and techno, performing at venues such as Brighton's Pavilion Theatre, Claridges, Florence House Retreat Centre, festivals and private events.

For over 20 years she has worked as a session musician and featured on a number of albums. She has performed and made two cds with the fusion band; a blend of sitar, violin, tablas, keyboards, gongs, chants and songs, and played concerts at numerous events around the south coast. She also plays with harmonium and tabla in a Brighton chanting group who provide a space for the public to sing chants from around the world. As a solo performer she use some unique electronic effects and her own tunings to create sound journeys that she calls 'Celestial Sitar". Musical influences have been: Vilayat Khan, Nikil Banerjee, Balugi shrivastav, Pink Floyd, Quintessence, Shakti, Omar Farouk, & much world music.

She is available to play sitar with tablas or solo, or in a duo with a delightful classically trained Odissi dancer. They perform at private functions including weddings, parties, baby naming ceremonies, retreat centers and corporate events.

“Everything was as hoped for. We all enjoyed her performance. Booking was straightforward and easy. Thank you. ”