This Midlands German Oompah Band have been performing at Oktoberfest themed events for many years - be ready for great music, comedy and audience participation.
Share Facebook Twitter
Recommended 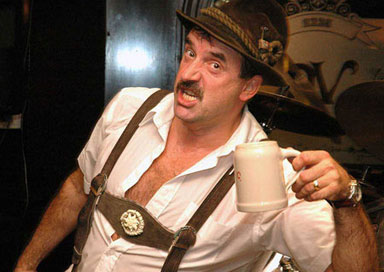 This 3 piece Midlands German Oompah Band have been entertaining people for German themed events and Oktoberfest parties for many, many years.

They are constantly being re-booked everywhere they play and are in demand especially throughout October to Christmas so do book early to avoid disappointment.

The front-man will really get everyone involved and will really give you a night to remember! Expect quality musicianship, great comedy value and audience participation

“Many many thanks for the performance of the Men in Shorts Oompah Band at RAF Wyton Officers’ Mess on Friday Night, they were excellent. Les Benton as the frontman and compere extraordinaire deserves special mention for really getting the evening going. ”

“Thank you for a fantastic evening. The show is magnificent and if we wouldnt hesitate in recommending you to anyone ”

“When planning our party we wanted something to suit all ages and you were definetly the right choice. We will be talking about the evening for years to come ”

“I booked the band for a special Bavarian theme night which was probably our most popular function all year. The evening was so successful that we requested to book them again this year. Many of our owners have already booked their seats! ”

“Many thanks for a professional and polished performance. We look forward to welcoming you back at Liberty Way in the near future. ”

“The audience was treated to an energetic performance in two halves which lasted for well over two hours. In the true tradition of the Bierkellers there was a great deal of audience participation with much swaying and sloshing of ale.' ”

“What can I say about Saturday 19th - they were absolutely brilliant, a Bavarian Oompah band with outstanding comedy. The boys provided a full on audience participation show. Our Rene and the nuns loved them and we have already rebooked for next year. ”

“We had a fantastic evening as did all our friends! You are a born entertainer and everyone said how brilliant you were, and what a good voice you have. It was such a good evening and everyone joined in and mixed really well. I would have no hesitation in recommending you to anyone. ”