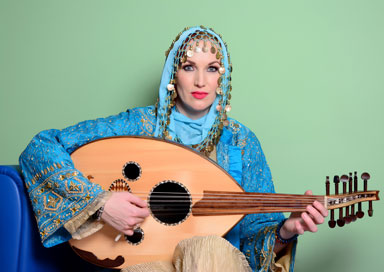 This English/Palestinian/German mezzo-soprano, oud player and cellist studied the oud and Arabic song with Abdul Salam Kheir, having started by teaching herself and learning from colleagues Khaled Saddouq and Habib Al Deek, while teaching at Al Kamandjati music school in Palestine.

There she taught singing, both Western classical repertoire and Arabic song, cello and music theory for 3 years. She then also taught at The Freedom Theatre, Edward Said National Conservatory of Music Summer Camp and the Yamaha Music School.

Since Returning from Palestine in 2012 she has completed an MSC in Applied Music Psychology at the University of Roehampton, where she gave many recitals and performed the role of Hansel in the university’s first ever fully staged opera production.

She then worked with the Peace and Prosperity Trust and Open Bethlehem as associated artist and administrator, as well as teaching at Taqasim Music School. She has recently started the project, Music with Refugees, giving concerts involving local and refugee communities in Germany and Greece.

“You have and an angelic voice ”