This Birmingham Bollywood singer is available for weddings, parties and Ladies Sangeet as a soloist or with a female vocalist with professional backing tracks.
Share Facebook Twitter
Recommended 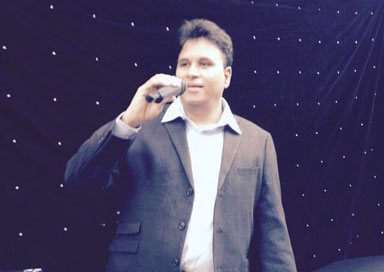 This Midlands Bollywood singer is available for weddings and Ladies Sangeet as a soloist or with a female vocalist with professional backing tracks and performs across the Midlands and beyond.

He has a lot of experience in singing and entertaining people at Asian weddings and private parties. He has his own PA equipment and over 1000 backing tracks and can sing in Hindi, Urdu and Punjabi.

He's been singing professionally since 2005 and before that had been taking part in singing competitions on various TV channels.

Music is his passion and he specialises in Bollywood songs ranging from golden oldies to the latest ones - he is happy to travel nationally.

He is a big fan of the singer Kishore Kumar and can perform many of his Bollywood songs incluiding Kishore Kumar, Rafi, Sonu Nigham, Rahat, Arijit, Atif Aslam and he recently performed at the Star Parivar Awards in Mumbai.

This is a sample of the many songs he can sing - he can also take on the spot requests.

“He was amazing, and if another occasion came up to hire him again I definitely would. He got our guests singing with him and some even dancing, the amount of interaction was perfect. He was very professional and also knew what songs were appropriate at what time. Our event was made even more memorable with him being a part of it:) Thank you again. ”

“The booking process was fairly straightforward and he was smartly presented and was punctual. He is an excellent singer. One of his strengths is his versatility - he was able to sing anything, old or new, classical, modern or gazals. He really made the difference in terms of the fun and entertainment we all had. We will certainly book him again in the future and will recommend him to our friends & colleagues. ”

“The Bollywood Singer was brilliant. Wonderful voice and interacted very well with the audience. Thank you, you made it a memorable occasion. Strongly recommend him! ”

“He was a really good performer , he sang all the songs we requested plus a few extra he also interacted with the crowd very well ”