This French singer & accordionist can be hired with a clarinet player and is available for weddings and events that require elegant live French music.
Share Facebook Twitter
Recommended 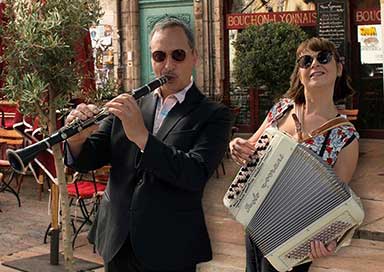 This professional French wedding singer and accordionist can be joined by a clarinet player to perform acoustically or with amplification according to your requirements. They perform instrumental music and songs with vocals for any occasion where French music is required.

You can hire them to lead your wedding procession while playing from the church to the reception venue through a town of a city or book them for any kind of function from weddings to parties and more. They can also walk around the tables as they play for that "Je ne sais quoi" feeling.

They have played across the globe in Europe, North America, Japan, Australasia and the Far East. Closer to home they have played at all the major hotels and restaurants in London including The Dorchester, The Grosvenor, Lanesborough, Park Lane Hotel, and The Ivy.

They have performed at music venues such as St Martin in the Fields, the Royal Opera House (Covent Garden), Wilton Music Hall, the Queen Elizabeth Hall, the National Theatre, Ignite as the royal Albert Hall. They have also played on the Orient Express, at the West Sussex Game Fair, and on boats, the Belle Vallee on the River Seine, Paris. They played at" La vie en Bleu " Bugatti " racing weekend event, for the London City Festival, Bloomsbury festival, Royal Ascot to name a few events. The singer accordionist also appeared in the ITV drama Mr Selfridge.

“Hi, Just wanted to say a huge thank you for Friday, the client absolutely loved you and had this great feedback to say about your performance. 'By the way, forgot to add... She is amazing: kind, talented, motivated. She played the part so well, and was the cherry on the cake for our event!!' Thanks again and I look forward to working with you again soon. ”

“She was a wonderful addition to our French Market. Her music helped create a lovely atmosphere for traders and shoppers alike. She was very easy to work with, punctual, and professional. I would certainly use her again for future events. ”

“Good day, I would like to take this opportunity to thank you for the music. For want of a better word Lol! We all had an amazing day and everyone commented on the Music during the afternoon and how it set the tone so well for the Day. Thank you once again and many thanks for the CD. Kindest regards ”