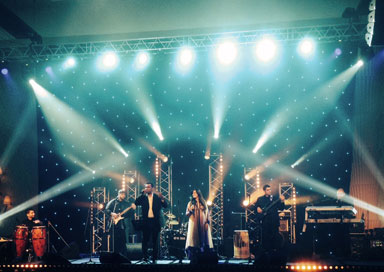 This dynamic 8 piece UK Bollywood band deliver the highest quality of Bollywood music in a power packed performances, with a highly professional approach, a flexibility to deal with any audience and an equally impressive repertoire of songs. This band will definitely leave your guests wanting for more!

This dynamic band bring together influences from the Bhangra, Bollywood, Urban and World Fusion music circuits and have a versatile and very capable singer who has been performing since childhood to audiences around the world. She has also performed alongside artistes from the Bollywood film music industry including Anup Jalota, Sukhwinder Singh, Nitin Mukesh, Mangal Singh etc.

“I found her to be a wonderful delight to work with. We recently hired her and her band to perform at my sister's Sangeet night. In the build up to the event she was excellent to deal with. She solved a lot of our logistical issues and her team and particularly her sound engineer were all overly helpful and highly professional. And most importantly, after all the planning and all the stress comes the night; and the singing was just exceptional. Within minutes people were up and dancing and one of the greatest compliments we've had about the night was the music and the singing. I highly recommend her and her team and would have no hesitation in hiring them again for our next event. ”

“Hi I just wanted to take this opportunity to say thank you to you and the band. Having you guys at our Diwali event last week made it extra special and the students thought you guys were fantastic. I have received lots of positive feedback and I would recommend you guys without reservations. Thank you once again. ”

“She is a versatile singer with an ability to sing all styles of Indian music. Their music combines both traditional Indian melodies with modern production and are great for the dance floor as well as just to listen to . I congratulate them on their music. ”