This Cambridgeshire magician and hypnotist is regularly seen performing close-up magic at birthdays, weddings and other special occasions that will amaze guests
Share Facebook Twitter
Recommended 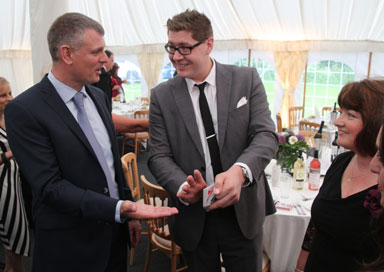 This Cambridgeshire magician and hypnotist is regularly seen performing magic at birthdays, weddings and other special occasions. He started out his magic on YouTube a few years ago showcasing his magic online and in the streets to the general public and has also been approached by Britain's got Talent in which he performed and auditioned for in 2015.

He is often seen at local events such as the Whittlesey Festival, the Italian Festival and the Stamford Kiwanis charity day where he performs close up magic, hypnosis and pick pocketing. He has worked for many corporate clients such as Tesco's, Argos and the Freemasons and has public liability insurance and is covered by Equity for up to £10,000,000.

Hiring a magician can make your special occasion even more memorable and unique and this act can make that happen for you with his cheeky, funny and light hearted personality. His entertainment will engage all your guests to have a great time and he can perform "close up" and "mix and mingle magic" to all guests at wedding receptions, parties and corporate events. He can also demonstrate the power of hypnosis and show the power of the mind.

“He was a great addition to our team build, engaging large groups to individuals with various tricks that had us all amazed! ”

“He enthralled our guests with a wide variety of really great tricks, he really helped to make the night a success. I’d recommend him wholeheartedly. ”

“We invited him to our wedding reception to entertain our guests with his amazing magic. Unaware of just how good he really was, he left our guests speechless. One trick that he did with myself and my wife, he left us both stunned. We would definitely recommend him to anyone who wishes to have a very unique way of entertaining their guests. ”

“He was invited to perform his magic at tables at our evening event, He was a huge success with guests as he performed his sleight of hand magic around the room. His quiet demeanour was unobtrusive but extremely well received by all the guests. ”

“I first booked him for his magic for a fund raiser for a local charity. He went down a storm and everyone was commenting on how much they enjoyed it and how professional he was... I have booked him twice since...He is a very professional magician and hypnotist with an eye for perfection, I would not hesitate to book him again. ”

“He ensured our special day was unique and one to remember. He did an excellent job at keeping the guests entertained throughout the day and we received some great feedback with many guests amazed at the tricks he performed. He was great at interacting with guests of all ages and I wouldn’t think twice about hiring him again. Thanks again! ”