This Lincolnshire magician performs close up magic that is performed right under your nose, in your hands, so close that you know that it isn't a camera trick.
Share Facebook Twitter
Recommended 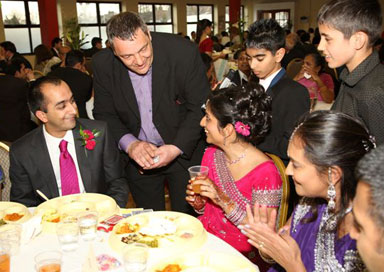 Close up magic is magic that is performed right under your nose, in your hands, so close that you know that it isn't a camera trick. No large expensive props are used usually just a pack of cards, some coins, a borrowed ring or other some other innocent item.

Having been in the entertainment business for 20 years, working the coast and staring in many charity nights and travelling round with other entertainers in a variety road show, his show can be presented to audiences from dozens to hundreds. On stage, he combines his magical skills and wit for his entertaining cabaret performance, with lots of fun and audience participation.

This first class magician is the perfect way to bring a magical touch to your special event.

Performing sleight of hand magic using cards, coins etc. and also some mind reading effects, he will both amaze and amuse,  below are some examples:-

Restaurants
He can perform a small personal magic show at the table usually lasting around 8-10 minutes. This can be between courses or just after ordering their meal this is an excellent way to ease any possible delays in service.

Banquets
Similar to restaurant magic, he can move from table to table entertaining guests during the meal.

Weddings
Wandering among the wedding guests whilst the wedding party are having the photographs taken and on through to the wedding reception moving from table to table, leaving the top table till last performing a special trick just for them.

“We were very impressed with the magician, everyone that saw him on the day said how brilliant he was and were amazed by his magic tricks. We would not hesitate in hiring him again for another event or in recommending him to friends. ”

“He was a huge hit at the party. His magic thrilled the guests and his presence brought a real buzz to the event. Both before the event and afterwards he was highly professional and thoroughly reliable – I would certainly recommend Paul and his magic to others. Fab! ”

“I apologise for the delay in thanking you for the great entertainment provided at my sister’s wedding – I can truly say you were the biggest of hits. I have still have cousins baffled over the tricks. In their words “the magician was awesome!!!” I would not hesitate in recommending your services to others. Thank you once again. ”

“Thank you for making my daughters wedding entertaining with your magic every one said how much fun it was and are still asking how do you do it. ”

“Thank you for putting on such an entertaining Magc Show for my 70th Birthday Party . It was a lovely surprise! I was truly amazed by the standard of your magic performed at close quarters . it is something the whole family will long remember. ”