Sam plays the Oud and flamenco guitar in the Midlands and beyond and is available for events where Arabic or Spanish music is required, solo or with percussion.
Share Facebook Twitter
Recommended 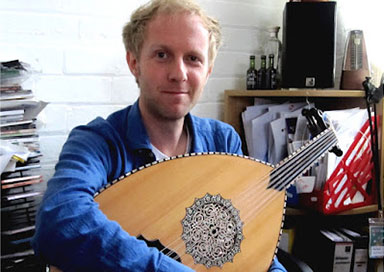 The Ord Player plays the Oud and guitar, his playing influenced by a host of jazz, Arabic and Spanish musicians, from Paco de Lucia to Anouar Brahem.

He can perform on the Oud as a soloist, or in a duo or trio with percussion (riqq, darbuka, frame drum etc) and clarinet/ney/flutes.  His music is a mix of improvisations around traditional maqams/Arabic scales, various jazz/world music pieces, and material written/influenced by the likes of Anouar Brahem and Rabih Abou-Khalil.

He was taught the guitar from the age of 11, and has been performing as part of a well established jazz-world music group since 2005, appearing at venues and festivals worldwide, including WOMAD, the Cheltenham, Manchester and London Jazz Festivals, Symphony Hall Birmingham, Royal Festival Hall on London's South Bank, the Royal Albert Hall, touring in Ireland, France, Spain, Poland, Serbia and Bulgaria.

He has long been keen on improvisation, jazz, Indian and Arabic music, and also performs with an Indo-Jazz fusion group, a popular Anglo-Polish singer-songwriter, and also composes for EMI Production Music.

Can also combine with Latino Django to perform Gypsy jazz, flamenco/Spanish and classical music as a guitar duo to full quintet with double bass, violin, sax/clarinet and trumpet

“He was just perfect, he helped make the evening very special with his great talent, wit, flexibility and manners. I couldn’t ask for more ”

“We want to say a huge thank you for attending our wedding and playing for us! He was perfect and his music added such a beautiful atmosphere to our drinks reception. He was so polite and really helped to calm the grooms nerves with his chilled personality :) we gave him some last minute songs to play and he learnt them no problem and nothing was too much trouble! honestly we can't thank you enough! We are so happy, thank you so much ? Hannah and Ali ”

“I just want to thank you for a fantastic performance. His oud playing was amazing and all of our guests enjoyed it. I didn't get a chance to personally thank him on the day so if you could please forward the message to him. ”