This classical guitarist has performed in over 30 festivals in Spain, France, USA and UK and is now based in Bedfordshire and available for concerts and events.
Share Facebook Twitter
Recommended 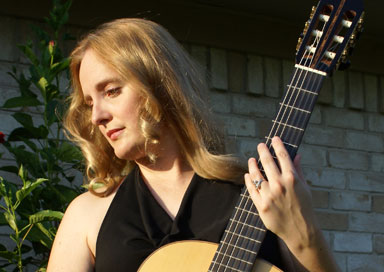 She has performed in over 30 festivals, including the 2010 Chamber Art Music Festival in Madrid, Spain, the Pennsylvania Academy of Music Festival, Guitaromania in Agen, France, and at the Menil Community Arts Festival at the Rothko Chapel in Houston.

She has been featured as a guest soloist for the NYC Classical Guitar Society, Arizona State University, Svenska Margaretakyrkan in Oslo, Norway, Peck School of the Arts in Wisconsin, the Grand Canyon Guitar Society, through the Performing Arts Society of Kenai, Alaska, Studley Castle in Warckshire, Warrington Parish Church Of St Elphin, and at the SAE Institute in Oxford sponsored by the Oxford Guitar Society.

She is a prizewinner in 8 international competitions including 1st prizes at the 10th International Guitar Competition “Simone Salmaso” in Italy and at the Concours de Guitare Classique Heitor Villa-Lobos in France.

She has also been featured on the radio in Alaska, Texas, Canada, and on the Iain Lee Show on the BBC Three Counties Radio in the UK.

This artist has a Bachelor’s from Peabody Conservatory where she studied with Manuel Barrueco and a Master’s Degree from Radford University in Virginia. She has two recordings; Ex TenebrisLux and Presti.

Repertoire with a month’s notice

“A mesmerizing evening of virtuoso classical guitar: she is one with the guitar and the world classics she translates to her rapt audience; there is no barrier between the exquisitely rendered music and the listener. ”

Barbara Christian, President of the Performing Arts Society in Kenai,