This Marching Band have been working in the entertainments industry for over 16 years & their band leader has served and worked in Military Music since 1995.
Share Google+ Facebook Twitter
Recommended 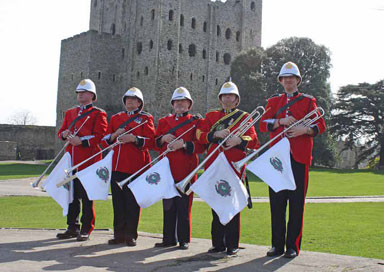 Formed in 2006, the main musicians of this Marching Band have been working in the entertainments industry for over 16 years & their band leader served and worked in Military Music since 1995.

Consisting of ex-regular (and current serving musicians from the military) the band travels throughout the United Kingdom (and are also able to travel abroad) performing for a variety of events from County Shows, Arena Events, Promotional Events, Street Parades, Special Events (days such as St. Georges Day) Pass Out Parades, Town Parades to the traditional Cabaret Marching Display (after dinner marching display indoors or out).

If you’re looking for something slightly unusual to entertain your guests after dinner why not try a Cabaret Marching display.

Able to provide anything from one trumpeter to a team of seven with percussion, we can add that Ceremonial / Triumphal sound to any product launch, Dignitary arrival, Bridal entry (as at Royal Weddings) or Awards Ceremony.

Whether performing on Traditional Fanfare Trumpets to give a military look, as medieval trumpeters (in costume and on natural trumpets) or in White Tie and Tails or in any other costume to blend in with your event we can add that triumphal sound to any event

The Fanfare Team are also available to appear in Military Mess Dress or as mentioned in white  and Tails or are happy to wear any costume to blend in with your theme i.e. Venetian Masked Ball, Medieval Banquet or Christmas event.

“I can't remember if I said this when we spoke with you last but the client was really please with how everything went on 16th...She said you were a pleasure to work with and that everyone was really happy with how it went so thank you! ”