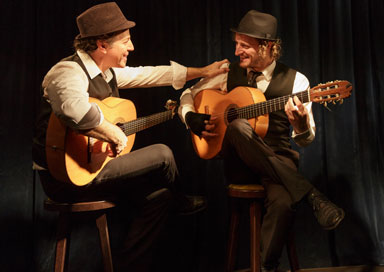 This London Spanish guitar duo met while working on the Gipsy Kings’ award-winning musical “Zorro” in London’s West End (booked through Find a Performer). They were both hand-picked and mentored by the Gypsy Kings as on stage guitarists and actors. Whilst working on the show they began to jam together and create a musical understanding, which before long had naturally/unintentionally developed into a solid repertoire of music that was well-polished due the hours of downtime between shows that they spent jamming in addition to the hours upon hours that they spent performing together on stage. They have continued to play together ever since, expanding their repertoire to cover more styles and genres.

As a duo and as solo artists the Spanish guitar duo have performed with the following artists, shows and companies:

At the following venues:

At the following major events:

We can also specially arrange any song for two Spanish guitars.