This professional classical guitarist is available for weddings and events in Kent and London and has a Masters degree from the Royal Northern College of Music.
Share Facebook Twitter
Recommended 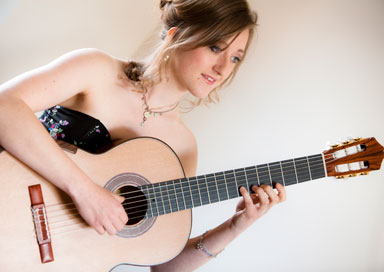 This professional classical guitarist is available for weddings and events in Kent and London and has a Masters degree from the Royal Northern College of Music where she was tutored by Craig Ogden and Gordon Crosskey.

Before she completed her studies at the RNCM in 2011, attended the Junior Royal Academy of Music studying with Michael Lewin between 2004 and 2006. She has also performed in master-classes with John Williams, David Russell, Julian Byzantine, Gary Ryan, Johannes Möller, Gordon Dunn and Eduardo Catemario and Roland Dyens. In April 2010, she performed for Julian Bream at the Guildhall School for Music and Drama and in March 2012 she performed for the Queen and the Duke of Edinburgh.

She has performed as soloist throughout the UK including the Bridgewater Hall and the Chetham’s School of Music and also in Europe. In 2008, she formed a successful classical guitar duo which toured the UK and worked extensively for the "Live Music Now" scheme. They also competed in several competitions including the Hattori Foundation, the Tillett Trust and YCAT.