The Bristol accordionist has been performing at weddings, parties and corporate events since 2007 and also offers music for French and Italian themed events.
Share Facebook Twitter
Recommended 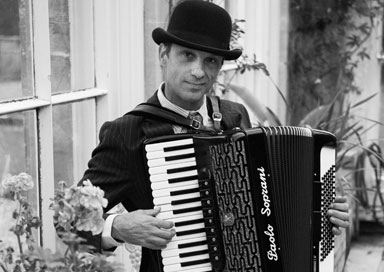 The Bristol accordionist has been performing at weddings, parties and corporate events since 2007 and also offers music for French and Italian themed events. He used to travel the country by canal boat working from town to town, but is now settled down in Bristol on dry land.

The Bristol accordionist began his musical education on the piano, aged 5, and continued for the next ten years, after which exams and life got in the way.

He ended up training as an artist, and went on to work in theater and puppetry, before his main influences have been the golden age of accordion music, 1930’s Paris, the rich musical traditions of Italy and Eastern Europe, and the rhythms of Argentinian tango.

“He played at my son David's Bar Mitzvah in Stoke-on-Trent. He music was perfect before, during and after the meal. His suggestion of doing the chair dance was fantastic and I am sure that everyone who was there will remember it for years to come. (The chair dance involved David being carried around the room on a chair, while the guests circled round and he played Hava Nagila Hava). Thereafter we danced to both Klezmer and Scottish music (as many of the guests were Scottish). Many guests commented on how much they enjoyed the music and I would recommend him for any event. ”

“Thanks to the musician, my husband's surprise 80th birthday party was the best we could have wished for. He played on a terrace before and after the dinner at an Italian restaurant. His nice personality and beautiful accordion music made it all perfect, and we even danced. We would warmly recommend him and we are hoping to be able to listen to him again. ”

“He was an absolute delight to have at our party. His playing and repertoire were exceptional and his engagement with our guests was friendly and professional. I would highly recommend him for your next event. ”

“He made our wedding so special. He played French music beautifully throughout our wedding ceremony and gave a fantastic French feel to our day. He is such a lovely man, he was very organised and all the guests said how fantastic he played. Thank you again! ”

“He really made my boyfriend's 30th birthday! He came prepared with a fantastic Italian set list and played continuously for the full two hours on our birthday barge! He was wonderful to deal with, nothing was too much trouble, and he made the day truly memorable for all concerned. I would have no hesitation in recommending him to family/friends - in fact, I already have! ”

“So pleased you could join us as you bring so much to the evening with your lovely music. Many thanks and best wishes ”

“Thank you so much for playing at our wedding. Everyone said how amazing you were, it was just what we wanted. We both had a fantastic day. ”

“His music created a wonderful ambiance for our garden party and we would certainly ask him to play again for other similar occasions. ”

“Thank you so much for Saturday night, it was lovely to have the music floating across the dock and we had lots comments about how welcoming it sounded. I hope you did not get too cold! You really helped create the atmosphere for a lovely evening. ”