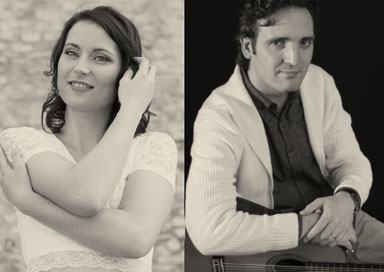 The singer was born and raised in New York from Italian descent, and is a Jazz and Latin singer and composer currently residing in London. She studied improvisation and composition at Trinity College of Music in 2009 with Anita Wardell, Nia Lynn, Pete Churchill, Simon Purcell, Liam Noble, Julian Siegel, Martin Speake and Barak Schmool, graduating with an MA in Jazz Performance in 2012.

In 2008 and 2009, she performed with the Tomorrow's Warrior's project "Jazz Alive" and in 2010, appeared at the London Jazz Festival alongside Norma Winstone. A former member of the London Vocal Project led by Pete Churchill and lead singer of British Samba Band Rhythms of the City, Noemi has performed at numerous London venues, including the Crazy Coqs, the 606 Club and Islington Assembly Hall, and toured the UK as well as further afield in Brazil.

The guitarist is an award winning guitarist, composer and lecturer from Sardinian band who has been based in the UK since 1994. Classically trained and with a Masters Degree in Composition, but also fluent in Jazz, Brazilian, Afro-Cuban and Contemporary music, he is a very in demand musician in the London scene as well as internationally, working with the likes of David Garrett, Basia, Julian Lloyd Webber, Silvain Luc, Harvie S, Andy Sheppard, Cleveland Watkiss, Paolo Fresu, Ronu Majumdar, Denys Baptiste, Abram Wilson, Filament Campus, Nawal Doughboy, BBC Concert Orchestra, City of Birmingham Symphony Orchestra, Neue Philharmonie Frankfurt and supporting Shirley Bassey, Jools Holland and Dr John, to name but a few.