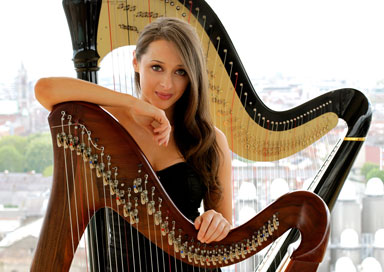 Sienna plays the Irish and Concert harps and studied at the Royal Irish Academy of Music, and holds the Associate Diploma in Teaching.

She also holds a B.A (hons) in Music and Irish from National University of Ireland, Maynooth, and a Master’s of Science in Music Technology from Univeristy of Limerick. She is also the holder of 5 All Ireland and International Harp competition titles.

As well as bring a professional harpist, she also plays the piano and can be booked with a combination of both instruments. She tours extensively as a harpist and has also toured as an Irish dancer.

She has recorded two studio albums and having been involved in many projects, she is equally comfortable recording as she is performing live as a soloist or as part of a band / ensemble.

She plays classical, traditional Irish, South American, jazz, Celtic and world music, as well as composing original material. Having experience working with a range of singers, from classical to contemporary, and musicians of all genres, she is happy to work in any environment.

“Thank you for the ethereal sounds from your harp. ”

“Beautiful addition to our day. ”