This Yorkshire wedding band love performing and are suitable for any type of event - weddings, university balls or corporate events where a party is happening
Share Facebook Twitter
Recommended 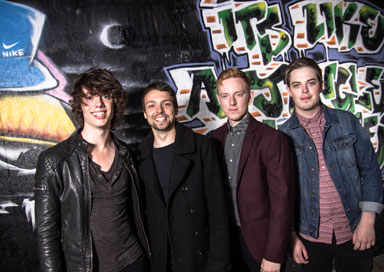 If you're looking for a high-powered, energetic party band to rock your event then you are in the right place with The Tones. Fuelled by the charisma and enthusiasm of 4 talented musicians, they love nothing more than to pump every ounce of energy into every single show they play.

This is really highlighted when you see their performances - if they aren't exhausted following the end of your event then they'd feel they hadn't done their job! They are driven by the audience having a fantastic time and strive to get everyone partying with the vast array of tracks they have in their repertoire.

The Tones party band perform nationally and are suitable for any type of event. If you need a band for a wedding, university ball, corporate event, or absolutely anywhere you'd like to get your guests up and partying the night away, then be sure to be in touch - you won't be disappointed!

“Hey guys, just wanted to send you a huge thank you for the AMAZING performance you put on at our wedding (Laura and Scott 16/08/14) we are so behind with sending our thanks out as was waiting on our pics which we have just got and wanted to send our suppliers some pics from the day. We have had so much fab feedback about you, everybody loved you and you certainly got everyone up dancing! Sweet disposition was performed to perfection and LOVED that song 2 and hey Jude formed part of the set! I really cant imagine what the night would have been like without you! you really did make it!!! Loved it, made it even more of an amazing night! Wish id messaged earlier for the set list as was spot on! ”

“Thanks so much for your email and I did mean to email you sooner (sorry) to say a massive thank you to you all!!! You are all fantastic and all the guests loved listening to you guys perform at the wedding; you have such great energy and talent. I knew from the start that we had picked a winner and can only wish you a fountain of success in the future, you deserve it! Yes, as for our dancing I can only apologise (all was going well until many a sambuca shot was put in front of us, so some parts are a little blurry to say the least….) The first dance was perfect too, especially as it’s our little boys favourite song to dance with us to :) You can be sure that we will be recommending The The Tones to anybody who requires a fantastic band in the future. Please pass on our thanks to the rest of the guys. Top band! We are fans for life :) ”

“We had the The Tones at our Halloween wedding. We want to say a massive thank you to all the guys. They were amazing, and made our wedding extra special! The lads even got into the sprit and dressed in Halloween costumes; which gave the evening reception a extra touch! Everyone loved them! Thank you so much again, words cant express how grateful we are! The day was a tremendous success!! Thanks Guys! ”

“We just wanted to write and say a massive, massive thank you for playing at our wedding. You guys did a brilliant job at the service and all the guests commented that the acoustic set was fantastic. We loved you guys getting the party going and all the guests thought you were amazing. Top bunch of lads and we would highly recommend The The Tones to anyone needing a great rock and roll party band. All the best for the future. ”