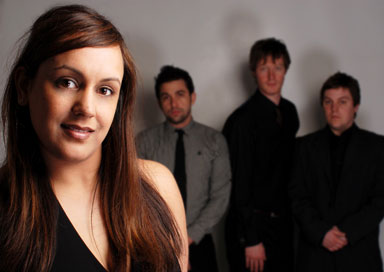 Waterfalls is a premier London-based covers band comprising gifted musicians from across the globe. For over 10 years Waterfalls has been entertaining audiences across a broad spectrum of events, from pubs and clubs to weddings and corporate functions. Clients include Westminster University, Canon, Nokia, Zurich Insurance, the RAF and the Army, taking the band across Europe, Australia and South America.

Individually the band members have graced the stages at The Montreux Jazz Festival, the Notting Hill Carnival, the Essential Festival main stage, London Jazz Cafe and Ronnie Scotts. They have appeared alongside names such as Tom Jones, Roxette, James Brown, George Clinton, The Scissor Sisters, The Brand New Heavies, Angie Stone and Fat Boy Slim. They have also released material on a number of labels including EMI, Universal, Go Beat! and Lowlands in Belgium.

Together they create a breathtaking live show, both sonically and visually, featuring four-part harmonies, incredible musicianship and clever arrangements. With a set list ranging from soul classics to rock favourites and modern R and B dance floor fillers, Aloma has the professionalism and versatility to suit any occasion and make it a night to remember.

“As a band we could not fault them. Before the wedding itself they took a lot of time out to prepare exactly how we wanted the day to pan out. Not only did they give us a stunning performance in the evening, but they also provided dj music during the wedding breakfast. The thing I liked most about them was the fact that they don't sound like a typical wedding band that you would find at your uncle's wedding! All the songs they played from their extensive play list were just as (if not better) than the original artists played them! ”

“Waterfalls are one of the bands you can rely on to get any crowd onto a dance floor. ”

“What a fantastic band. Your show was amazing.... your versions are even better than the original artists! ”

“Waterfalls must have one of the biggest repertoires in the UK .... They seem to know every song you would ever want to hear. ”

“Waterfalls are fronted by a fantastic female singer who dominates the stage with great vocals and exceptional charisma. The band also feature an incredible guitarist and very tight rhythm section who excel in playing medleys of all the big hits. Waterfalls turn every night into party night ”