With tight vocal harmonies and years of experience on their instruments, this female Mariachi band look and sound great! Book from 2 up to 10 musicians.
Share Facebook Twitter
Recommended 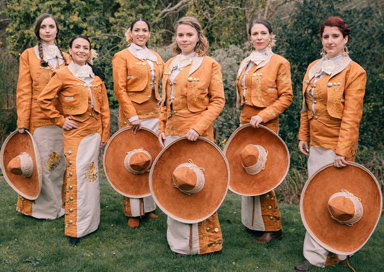 Hailing from Mexico, Cuba, Colombia, and the U.K this female Mariachi band was formed in 2013 out of the desire to shatter stereotypes and include, empower, and give a voice to women in the genre, in line with the social responsibility that comes with their name.

They recently returned from playing at the Women’s Mariachi Festival in L.A, California where they received a standing ovation and played live on both Univision and Telemundo TV channels, and were featured in countless publications.

They were the chosen band at the Mexican Independence day celebrations hosted by the Mexican embassy in London. Other past clients include the U.S Embassy, the British Museum, the Victoria & Albert museum, IKEA, Disney, the British Library to name a few.

Not only is each member a fantastic instrumentalist in her own right, but there are no less than three lead vocalists in the group, all with the vocal power and clarity expected in any serious mariachi band.

Officially a 7-piece band, this female Mariachi band can play in smaller groups if required, all the way down to a duo if necessary, though this is not recommended for an authentic mariachi sound.

With tight vocal harmonies and years of experience on their instruments and in the mariachi style, this female Mariachi band also look the part!

They are available to play serenades as per the Mexican tradition, as well as festivals, cultural events and absolutely any kind of celebration. All of the mariachi classics are included in their repertoire, with some beautiful arrangements of well-known songs including classics in English arranged in an. authentic mariachi style, which makes the band truly versatile.

They have 4 different styles of mariachi outfits made to measure in Mexico, which clients can choose from.

Instruments in the band are Guitar, Vihuela (small Mexican percussive guitar, Guitarron (a very large Mexican bass guitar, played in octaves to double the volume of the sound), trumpets and violins.

They can travel anywhere and are very happy to learn any favourite song for a special occasion.

You can happily hire them completely acoustically or they can also provide amplification if needed.

“Thank you for a fantastic evening of mariachi singing. You looked the part and sang the part – the party became alive when you were performing. We didn’t want you to stop!!! It was enjoyed by all my guests from youngsters to the older generation. ”

“we would definitely recommend them! They worked around our party needs and ensured everything was taken care of. The music these ladies played was exquisite and authentic! They created an excellent party environment for our small theme party. We would recommend them for official and unofficial venues and are sure you will be more than happy with their service! We adored this all-female mariachi group! ”

“...definitely the highlight of my party. Everybody loved them. They made people dance and sing, it was exactly what i was looking for… i will definitely recommend them and hire them for my next event ”