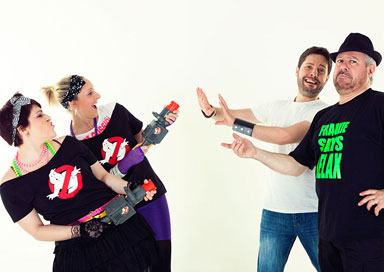 Step inside the DeLorean and brace yourself as we go back in time! Back to the 80s are the ultimate tribute band to the music of the 80′s. The band recreate the sound, vibe, look and hit songs that everyone loves!

They provide a diverse set list of 80′s tunes including songs by Madonna, Frankie goes to Hollywood, Wham, Cyndi Lauper, Tina Turner and many many more!

This authentic 80s Tribute Band deliver a show bursting with fun and excitment with audience participation as a must! They guarantee that you will have the most fantastic party with all your guests on their feet, dancing and singing along to the best loved songs of the 80′s.

This fantastic 80s tribute band sell out venues and wow audiences wherever they go. With extensive bookings for corporate events, theatre shows, festivals, weddings, private parties and special occasions they are the perfect band for your event!

“Just want to thank you for two great shows here at The Venue last weekend. Lots of great feedback from our clients and it was a pleasure working with you! ”

“You were awesome, thank you so much for bringing the night to an end in such spectacular fashion. That was the loudest we’d heard the crowd sing all night! ”

“Thank you for the visit to the Netherlands and the great performance. We’ve only had positive reactions, you guys were perfect! We will definitely be seeing you again soon! ”

“I just wanted to say a massive thank you for the launch last week. Everyone commented on how great you sounded, how professional you were and what a great job you did! ”

“Many thanks to you and the band for the show yesterday. Not only are you very talented performers, but you were friendly and fun to work with. You set the stage professionally and neatly, your PA rig was loud AND sounded great, and your energy and entertainment value throughout both sets was as good as we have seen from any live band – we couldn’t have asked for more! ”

“This is the third time we’ve had the group back to play for us. Our audiences have been over the moon with their performances and have joined in, dancing and standing up to sway and sing along with the group. After our first experience we made sure that the hall was set up to allow maximum audience participation. It was fully used and our bar takings were excellent, a sure sign that they were really enjoying themselves. A particularly nice touch was the girls coming down onto the floor! ”

“I am just emailing to say thanks again for a superb show last night – an event which appears to really have captured the spirits of the locals in an unusual way. You have managed to get everyone on their feet, including the hardy people who came thinking they were not going to enjoy it. In all my 18 years of being involved with the Royal Manor Theatre, I’ve never, EVER, seen a show that gets people on their feet to cheer the act on stage. It’s simply not done here! Seeing all the people leaving, singing the songs, talking about the show and basically just saying how much they enjoyed the evening was superb – you can’t buy that. I’ve had a few emails already, and people have loved the night so much. ”