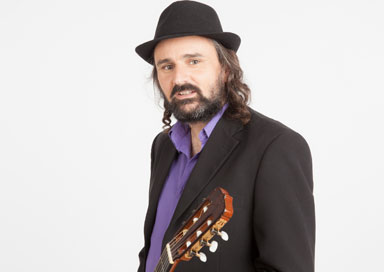 The Bristol Spanish Guitarist has been performing at restaurants, weddings, parties and corporate functions since 2004, usually lending the occasion a beautiful Spanish ambiance.

He has a good knowledge and feel of all of the major flamenco “Palos” - or rhythms - usually playing or improvising a few versions of each. These can be joyful, lively or sorrowful and he endeavours to communicate fully the emotion associated.

The Bristol Spanish Guitarist studying classical guitar aged 10 attaining grade 8 aged 16 before later turning his attentions to the study of Flamenco guitar and has studied under virtuoso guitarists including Manolo Franco, Jose Antonio Rodriguez and Jose Luis Balao in Spain, and Francisco Antonio Clinton and Tito Heredia in this country.

He also performs with Flamenco dancers and singers, plays as part of a Gypsy Jazz duo and is newly working on a classical duo project with another guitarist.

He would also be prepared to learn a particular piece given sufficient time for that piece taking into account its difficulty and length.

“Great performance. Exactly what I had hoped for. On time and thoroughly professional. Booking very easy and made contact promptly. Played a great selection including my specific request of Recuerdos de la Alhambra. ”

“We were super happy with such a pretty collection of music. He is very talented and very easy to deal with on the day and also before our day. We were extremely happy. Thank you so much. From Sarah Munday and Jason Sedgwick ”

“Thank you so much for playing for my mum's 80th birthday. The music was wonderful and made the evening special. I will be recommending you. ”

“Incredible player. Created the most beautiful atmosphere- we had lots of comments from our guests on how fab he was. Was just a genuinely nice guy! ”