This solo London Bollywood dancer performs at the highest levels with an individual flair and style that reaches out to the audience.
Share Facebook Twitter
Recommended 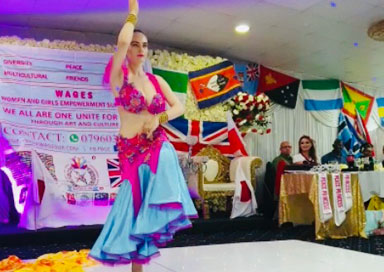 Looking for a solo Bollywood dancer in London? This performer was born and bred in London and is of Indian, French and Portuguese descent. Her mission is to enhance people’s lives through fun, laughter, inspiration, creativity and self-expression!

She has works as an actress and dancer for Indian films and TV. UK credentials include Downtown Abbey and as a dancer for Cinderella filmed at Pinewood Studios. She has also performed as an ambassador for Girl Empowerment Support Ltd which was aired on SkyPlus News.

This solo London Bollywood dancer performs at the highest levels with an individual flair and style that reaches out to the audience. With a twist of commercial appeal, elements of belly dancing & classical Indian dance here is a description of a typical performance by the Bollywood Divine: