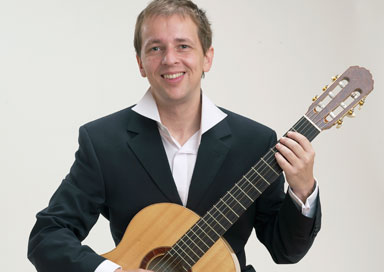 Are you looking for a wedding guitarist in Lincolnshire? James creates a beautiful sound playing classic pop songs, jazz songs, Latin and classical guitar repertoire and brings an extra touch of class to any event.

The Lincolnshire wedding guitarist has a real versatility as a guitarist that comes from his breadth of experience. He started playing the guitar at the age of 9 and his first teacher was a professional jazz guitarist.  In his late teens he started studying classical guitar, going on to study music at the Royal Welsh College Of Music And Drama. Whilst he was there he studied with the great classical guitarist John Mills.

He has also studied latin guitar with the legendary Argentinian guitarist Jorge Morel and had lessons and attended masterclasses with John Williams, David Russell, Stephan Rak and Eleftheria Kotzia.

During his playing career the Lincolnshire wedding guitarist has given solo classical guitar performances, played electric guitar in pop and rock bands, played with orchestras, worked in theatre bands providing music for musicals and even played bass guitar in a 16 piece national jazz/funk band.

He writes many of his own arrangements of popular songs and if there is a specific piece that you want, he will even write a unique arrangement just for you.

“Thank you for playing at our wedding! You really set the mood for all of our guests for the ceremony & we all loved how you mixed modern tunes & some classic pieces too it was & sounded fantastic! A real pleasure to work with too especially picking the music for our day your professionalism & easy too talk to nature really made working with you very easy indeed. ”

“We just wanted to say a huge 'thank you' for playing at our wedding ceremony. It was really special to have live music and so many of our guests commented how lovely it was. Again, many thanks for being part of making our day so magical. ”

“Just wanted to thank you again for playing for us yesterday. We had so many compliments from our guests about your work.we thoroughly enjoyed your music. Thanks again. ”

“We were highly delighted with the guitarist's performance, he was perfect, so gifted... all our choices of songs he played perfectly, he is a very talented musician. He is highly recommended. ”