This Midlands ceilidh group perform all the well known Irish folk songs that will get the audience singing and lively jigs and reels to set the toes tapping.
Share Facebook Twitter
Recommended 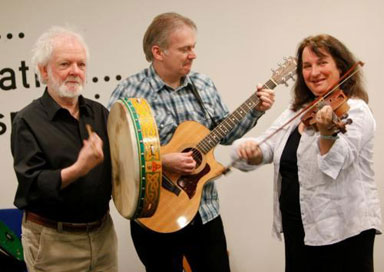 This traditional Irish music band is available for Irish nights, ceilidhs, folk clubs and weddings throughout the Midlands and beyond.

Their repertoire mainly comprises of well known Irish folk songs to get the audience singing and lively jigs and reels to set the toes tapping. If the mood is right they can include more traditional Irish music at one extreme or even a bit of modern music at the other. On request they can add a dance caller too for Ceilidhs.

The band members are all highly experienced singers and multi-instrumentalists and they have a top quality sound system. (The fiddle player doesn’t sing­ it makes his fiddle bounce up and down if he does.)

The line up of this band has changed over the more than ten years that the band has been in existence, having a kind of a fluid line-up, but it has always included some of the best singers and musicians available in the West Midlands region.

Today's lineup has been constant for some years and can deal equally well with folk club venues, weddings, ceilidhs or Irish theme nights. The band always choose the repertoire to fit the occasion so the songs performed at a folk club will not be identical to those presented to a rugby club audience. But the music will always be of high quality and the performance lively and entertaining.