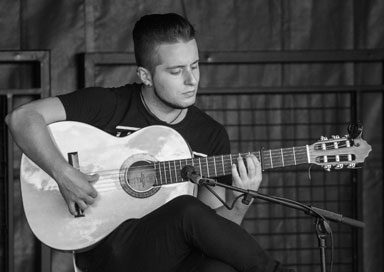 This young Flamenco guitarist is based between the UK and Barcelona. His skilled, personal approach to live performance and recording has led him to be described as "the brightest rising star on the UK flamenco scene."

He has studied masters of the art such as El Entri, Juan Ramón Caro, Rafael Cañizares, Joaquín Herrera and Gerardo Núñez.

He has performed at a variety of top UK venues such as The Roundhouse, The Royal Albert Hall and Ronnie Scott's as well a variety of venues across Europe.

His performances range from authentic demonstrations of Flamenco in its traditional form, (usually alongside a variety of high level flamenco dancers and singers) to fusion projects which incorporate a range of jazz and world music influences into his unique sound.

“He is one of the most talented people I've worked with. I had the pleasure of playing dhol alongside him during a Bhangra performance at the Oxford University RAG Ball. The ease with and level of complexity to which he picks up new material is truly awe-inspiring. I hope to work with him again. ”

“He has been playing in our restaurant for over 2 years now and has always been professional and reliable. During this time he has amassed a good following from our regular customers and this has proved beneficial to us both in terms of reputation and revenue. His performance is always fresh and vibrant and we would have no hesitation in recommending him as a performer to other venues. ”

“He is an exceptional performer, and he set the scene delightfully at our wedding which was held at 'The Barn at the Grange, Winterbourne Dauntsey on the 15th September last year. He was highly recommended to us after his stand out performances at the Beggar’s Fair in Romsey. The style and sophistication of his music provided the perfect accompaniment to the arrival drinks served to our guests in the courtyard and created a beautiful ambiance to kick off the celebrations. He remained professional throughout, from booking through to performance and there was nothing more satisfying than to arrive at the venue and hear the rhythmic sound of flamenco guitar. This was a big day that required a big performance and I am so pleased that he provided the perfect entertainment. I have already recommended him to friends and family and will continue to do so. We wish him all the best for the big future that lies ahead him! ”