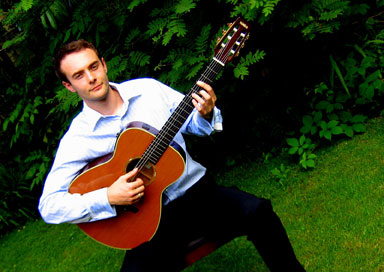 Performing since 2001, this young guitarist is currently receiving glowing reviews for his performances which encompass and evoke elements of contemporary, world and flamenco music.

He has spent the last five years forging his own guitar technique and method of playing and performs original material alongside fresh interpretations of traditional flamenco, classical and pop favourites. The style of his compositions looks towards such contemporary icons as Dominic Miller, Juan Martin, Michael Hedges, Antonio Forcione and Rodrigo y Gabriela.

He began playing guitar at the age of eight and with inspiration began writing original material (lyrics and music) from a relatively early age of 15. He first began learning to play in the styles of blues and rock however the one resounding call came from the acoustic and flamenco sound of the guitar which he first saw played on the streets of Andalucia aged 6.
He later went on to become a student at the Academy of Contemporary Music where he was taught by the late Celtic and classical guitarist Eric Roche, during this time he also met and studied with Sardinian Guitarist Giorgio Serci who introduced him to the techniques of the Gypsy guitarists of Spain, these new avenues where absorbed and used to forge his own unique spin on the playing of guitar leading to an ever evolving fusion of Latin and Mediterranean influenced styles amongst world music, played with the very latest contemporary techniques.

Having launched himself as a soloist in the summer of 2005, he has found himself playing in venues across the south of England with residencies in London and Surrey, a solo performance at the Royal Albert Hall and the release of his debut album which features both CD and an accompanying live DVD to give a visual experience into his unique playing style.

“Both Richard and I really appreciate that you turned up on time, set up without any fuss and then played the most wonderful music. It was just beautiful and we could have listened to it all evening. It really did set the tone of the event - so thank you a thousand times. We have received so many thank you cards for the event and they have all mentioned the music that you played. ”