This classical, popular, jazz and Latin guitarist is based in Devon and is available for weddings, functions and concerts throughout the South West.
Share Facebook Twitter
Recommended 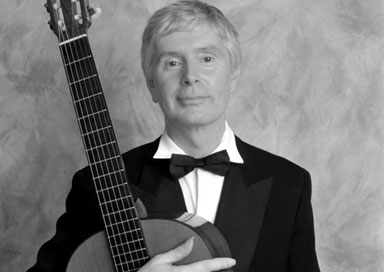 As well as having an international reputation for his original work, he is a remarkably versatile guitarist who has spent many years performing for private functions and has built up an extensive and varied repertoire of well known music covering a range of styles from classical through jazz and Latin and including many arrangements of popular favourites.

July 2003 saw a new name at the top of the Classic/Jazz and New Age charts in Korea. The phenomenal success of his acoustic guitar album heralded the arrival on the international stage of an original composer and accomplished instrumentalist who's work had been quietly earning him a growing reputation amongst serious music critics, Jazz and New Age fans alike, for many years.

From a successful start in the vibrant progressive rock music scene of Liverpool in the late sixties-early seventies, he went on to study Classical Guitar at the local Mathey College before moving to London in 1977 to further his musical career.

Jazz
At this time he began to look for ways of combining his love of improvisation (especially jazz) with his newly acquired classical guitar techniques and formed "Grand Union": a jazz-fusion band which featured amplified nylon-strung guitar.
This band was popular in London and well received by critics, winning the Greater London Arts Council's Young Jazz Musicians Competition before going on to play successfully in England and Europe at such venues as the prestigious Ronnie Scott's Club. During this time he began writing and recording for TV and Radio as well as performing live both as a soloist and in bands.

World Music
In 1982, sensing the limitations of the "Jazz Scene" and looking for fresh inspiration, he returned to full-time education to study Indian and other non-western music at Dartington College of Arts in Devon.

2006 has seen he's music used on TV and radio more than ever before, with examples ranging from BBC Radio 1's Breakfast Show to The Montel Williams Show in America, Histoires Oubliees (Discovery Channel), NHK News in Japan and Green Fog (well known TV Drama in Korea) to name but a few.
In addition RSM released a new solo album: 'Guitar Acoustics' and the Asian connection continues to flourish, with an extended concert tour of Japan and Korea successfully completed in the Autumn.

He is one of a new breed of modern musicians: an imaginative yet disciplined performer who has worked hard to thoroughly master his instrument. He has been equally at ease giving a classical recital or jazz concert and his unique, sensitive style is also very much at home within the "New Age" idiom.
He now lives in Devon where a lively artistic community and delightful rural environment combine to stimulate and nurture his musical work.