This magician specialises in providing close up magic and table magic and is one of the country's most highly rated magicians. He has worked at over 2200 events
Share Facebook Twitter
Recommended 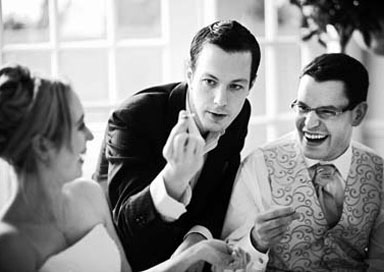 Hire a close-up magician for your event - this act covers the West Country and beyond.
He is a contemporary entertainer and member of The Magic Circle specialising in providing astonishing interactive close up magic and table magic. He is one of the country's most highly rated professional magicians and has amazed guests at in excess of 2200 events nationwide.

He began performing professionally in 2001 and has performed at International engagements at the Magic Castle Hollywood (more than 70 shows), The House of Commons London and Jumeirah Beach Hotel Dubai.

He is a member of The Magic Circle and award-winning member of the International Brotherhood of Magicians
Has performed close up magic on BBC2, Channel 4, Five and worldwide on BBC America.
Delighted clients include Samsung, BBC Bristol & Bath Racecourse and his Edinburgh Fringe show received many 4 Star reviews in 2012.

He is one of the UK's most successful and in demand close up magicians. As well as being a highly skilled sleight of hand magician he also has a unique intelligent and entertaining presentational style that makes him stand out from many of his peers.

He also had a column in WPT magazine (the UK's top Poker magazine) and had his original magic tricks published in Genii magazine (the top trade magazine for magicians).

“He was simply phenomenal at my 40th birthday party at Adam Street Members Club. He casually mingled with guests in small groups, performing stunning tricks that none of us could work out. His close-up magic was the best I have ever seen, plus he was extremely professional and courteous. I would absolutely hire him again for any future events, and would highly recommend him to others. ”

“Apart from being a very nice guy, he has the ability to beguile an audience with his extensive and varied mystical performance. In a room full of sales and systems professionals, he managed to amaze even the most sceptical, who said they “could never be fooled”.The next day back at the office everyone was talking about “The Magician” and even people who did not attend the event were asking about his brilliant show.He certainly made the event a memorable one and most importantly ensured the night was a success and I am sure we will be inviting him back for future events. ”

“He is literally unbelievable. We are a set of barristers' chambers which held its Christmas party last night. He amazed everyone, including the High Court judges, who are professional sceptics. Not only that, but he has a wonderful manner and fitted in perfectly. As far as we are concerned he is the only magician to have at your party. In fact he's already got another job lined up through one of last night's attendees as a result. Thanks again ”